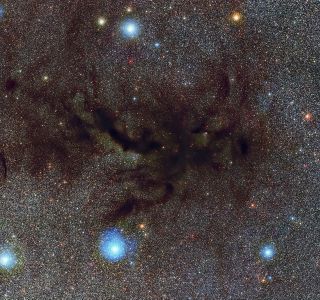 This picture shows Barnard 59, part of a vast dark cloud of interstellar dust called the Pipe Nebula nearly 600-700 light-years from Earth. This new and very detailed image of what is known as a dark nebula was captured by the Wide Field Imager on the MPG/ESO 2.2-metre telescope at ESO’s La Silla Observatory and released Aug. 15, 2012.
(Image: © ESO)

A telescope in Chile has captured a spectacular view of a pitch black cloud in deep space, a celestial home to several newborn stars hidden in a nebula named after a smoking apparatus.

The new space photo shows part of the dark Pipe nebula called Barnard 59, a distant nebula that forms the mouthpiece of the celestial pipe after which its parent structure is named. Barnard 59 is between 600 and 700 light-years from Earth in the direction of the constellation Ophiuchus (The Serpent Bearer).

Astronomers used a telescope at the La Silla Observatory operated by the European Southern Observatory in  Chile's high Atacama Desert to snap the new image, which ESO officials said is a textbook example of a so-called dark nebula.

"Originally, astronomers believed these were areas in space where there were no stars," ESO officials said in an image announcement today (Aug. 15). But it was later discovered that dark nebulae actually consist of clouds of interstellar dust so thick it can block out the light from the stars beyond."

Indeed, the new ESO photo shows Barnard 59 as a dark patch of sky framed by an immense star-filled background. At the center of the image are foggy, smoke-like features illuminated by newborn stars, according to an image description. [Inside Barnard 59: A Creepy Dark Nebula (Video)]

Barnard 59 is just one part of the Pipe nebula. Only when it is joined with four other Barnard objects do they appear to form the complete smoking pipe after which the structure is named.

There is relatively little star formation actually underway inside Barnard 59, when compared to other dark nebulas, ESO officials said. Several asteroids, which are actually in the foreground in our own solar system, also appear as blue, green and red stripes, they added.

The Pipe nebula's Barnard 59 structure is named after American astronomer Edward Emerson Barnard, who was the first scientists to systematically observe dark nebulas in through long-exposure space photography, ESO officials explained. In all, Barnard mapped 370 dark nebulas in the sky between the late 19th and early 20th century.

Barnard was also an avid comet-hunter who used the prize money from discovering comets to buy his first house, ESO officials said.

In the announcement of the new Pipe nebula image, ESO officials named the cosmic photo "Ceci N'est Pas Une Pipe," French for "This is Not a Pipe." The moniker is an homage to the famous painting of the same name by Belgian surrealist painter René Magritte (1898-1967), who painted a smoking pipe and wrote "This is not a pipe" in French below to remind the observer that the painting is a mere representation of a pipe, and not a pipe itself.

"By coincidence, this image is appearing on the 45th anniversary of the painter's death," ESO officials said.

This story has been updated to correct the nationality of painter René Magritte.