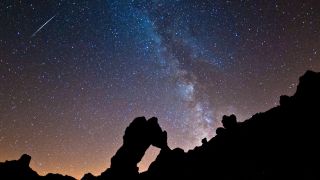 Veteran astrophotographer Roberto Porto snapped this spectacular view of a Perseid meteor over Mount Teide National Park in the Canary Islands off the west coast of Africa on Aug. 11, 2012 during the peak of the 2012 Perseid meteor shower. The Milky Way and rock arch Zapata de la Reina (Queen's Shoe) are visible.
(Image: © Roberto Porto)

A weekend meteor shower lit up the night sky with a fiery "shooting star" display to the delight of stargazers and space photographers around the world.

The annual Perseid meteor shower peaked in the wee hours of Sunday (Aug. 12), providing a dazzling celestial light show for stargazers lucky enough to have dark skies and clear weather for the event.

"We saw some shooting stars in The Hague, Holland," stargazer Jocelyn Jones told SPACE.com in an email today. "Super cool!"

The Perseid meteor shower has been observed by humans for at least 2,000 years. It occurs each year in late July and early August when the Earth passes through a trail of dust and ice from the comet Swift-Tuttle. This dusty debris slams into Earth's atmosphere at more than 130,000 miles per hour and burns up, creating the fiery meteors seen by observers.

From the ground, the Perseids appear to radiate out of the constellation Perseus, hence their name.

While Jones did not send in photos of the Perseid meteors over Holland, many other observers did. In California, night sky observer Maxim Senin celebrated his first clear Perseid meteor shower after years of attempts. [Photos of the 2012 Perseid Meteor Shower]

"It was an almost perfect night for Perseids observations, with temperatures in the high 70s and 80s," Senin wrote in an email. "It was a night anyone could stay out for hours, and even sleep outside."

Senin's photo shows a Perseid visible over the Los Angeles National Forest just north of Castaic. The meteor shines through the haze of lights from Los Angeles in the distance, which appear brighter than they actually were due to Senin's long exposure time.

Senin said he was with a group of 50 stargazers organized by the Los Angeles Sidewalk Astronomers club hoping to see the Perseids. He saw at least 20 bright Perseids during the night.

"In the beginning everyone was cheering and 'oooo'-ing for each meteor they saw, but there were so many after a while people stopped the oooos for the faint and short ones," Senin said.

In the Canary Islands off the west coast of Africa, veteran astrophotographer Roberto Porto had his spot all picked out on Tenerife, but was concerned that an island dust storm (called a Calima) might hamper his night sky view. Those fears, he said, turned out to be unfounded.

"The dark sky of Mount Teide National Park gave [us] a few hours ago this beautiful image: a bright Perseid meteor over the Arch known as the Zapata da la Reina (Queen's Show) and the Milky Way," Porto said.

SPACE.com also received photos of the 2012 Perseid meteor shower from across the United States, as well as from observers in Finland, Spain and Hungary. Late Saturday night, NASA held an all-night webchat to broadcast live views of the Perseids for those stargazers who weren't graced with clear skies.

Astronomer Bill Cooke of NASA's Meteoroid Environment Office led the webchat. His team anticipated seeing up to 100 meteors an hour (under the best observing conditions) during the Perseids peak.

Stargazer Rowena Zimmers of Saint Charles, Illinois, didn't snap a photo of the Perseids, but she did capture the awe of her two sons as her family watched the meteor shower from their home.

"Our boys were so excited to watch the meteor shower!" Zimmers wrote in an email. "We saw many within 30 minutes, including 2 bright flashes!"

Zimmers' family even took a nap break before waking up at 3:30 a.m. today to see the Perseids again. This time, they got an extra show.

"As we walked out onto the roof of our home, it was neat to see Jupiter & Venus!" Zimmers said. Venus and Jupiter are currently offering a predawn sky show for early-bird stargazers.

If you missed the Perseids early Sunday, don't fret. You can still catch them tonight, weather permitting.

The Perseid meteor shower may be one of the most dependable meteor shower displays of the year, but it's not the last event of 2012. On Oct. 21, the annual Orionid meteor shower will hit its peak, offering stargazers a change to see dust from the famed Halley's Comet light up the night sky.

Editor's note: If you snapped an amazing photo of the 2012 Perseid meteor shower, or any other night sky event, that you'd like to share for a possible story or image gallery, send images and comments (including name and location) to managing editor Tariq Malik at tmalik@space.com.

This story was updated to correct the name of stargazer Jocelyn Jones and to include more detail's of Maxim Senin's observations in California.