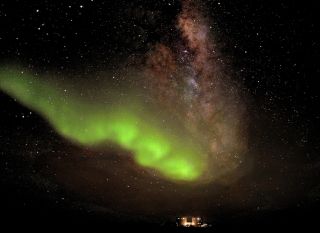 The handful of wintertime residents at an isolated Antarctica research station recently got a break from austral winter's 24-hour darkness when a shimmering aurora blazed to life over their lonely outpost in the middle of the East Antarctic Ice Sheet.

A photograph snapped on Wednesday (July 18) shows unearthly green curtains of light hovering above Concordia Station, a joint European research site run by the French Polar Institute and the Italian Antarctic Program, and one of the most hard-to-reach places on the planet.

The 13 people passing the winter there haven't seen the sun since it set for the final time in May, plunging the region into four months of darkness.

Concordia Station is entirely cut off from the outside world during Antarctica's coldest months, when temperatures plunge to around minus 112 degrees Fahrenheit (minus 80 degrees Celsius) on the East Antarctic Ice Sheet. Aircraft can't take off in such frigid weather, and the last plane of the season left Concordia in February.

Station staff snapped pictures of the recent aurora seemingly suspended just above Concordia, which looks tiny beneath the shimmering green glow. Yet even the bright aurora can't conceal the blaze of the disc of the Milky Way, which shines brightly behind the dancing southern lights.

This article was provided by OurAmazingPlanet, a sister site of SPACE.com. Follow OurAmazingPlanet for the latest in Earth science and exploration news on Twitter @OAPlanet. We're also on Facebook & Google+.