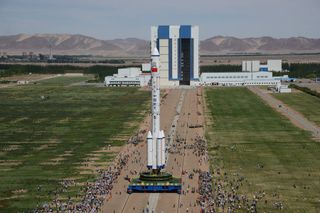 China's next high point in human space travel centers on a launch this weekend, with the planned Saturday liftoff (June 16) marking a major milestone for the country's space ambitions, according to state media reports and outside analysts.

The three-person crew that will launch on China's upcoming Shenzhou 9 docking mission is making final preparations to ride a Long March 2F rocket into orbit from China's Jiuquan Satellite Launch Center in the country's northwest region.

The astronauts will be China's first space crew ever to make a piloted rendezvous and docking with the country's Tiangong 1 space laboratory currently in orbit. It will also mark the first flight of a female Chinese astronaut, according to media reports.

Tiangong launched into space in last September. In November, an unpiloted Shenzhou 8 spacecraft successfully conducted rendezvous and docking operations with the space lab in an unmanned demonstration.

China's Tiangong 1 space lab module is a relatively humble orbital abode. It is about the size of a bus and weighs 8.5 metric tons, compared with the International Space Station (ISS), which weighs about 400 metric tons, notes space policy analyst Marcia Smith, founder and editor of SpacePolicyOnline.com.

"Even though Tiangong 1 is very modest compared to ISS, and even to the first Soviet and U.S. space stations, it is nonetheless a starting point for long-term Chinese expeditions in Earth orbit," Smith told SPACE.com. "If all goes well, it is a feather in their cap."

Smith said that China is taking the slow-and-steady approach to its space program.

"They do things when they are ready to do them, not on the 'fits and starts' model of the U.S. program.  I think … hope … believe the tortoise will not catch up with the hare, but perhaps we could learn a lesson from their strategy. Pick a long- term program and stick with it," Smith said.

SPACE.com contacted other China space program analysts, each offering their own perspective regarding the upcoming space venture by China.

"To me, the launch signifies Chinese commitment to incrementally achieving the three-step program they laid out in the 1990s — a patience that will serve them well in the long run," said Joan Johnson-Freese, professor of National Security Affairs at the Naval War College in Newport, R. I.

"This particular mission isn't a big deal in technical terms," Johnson-Freese told SPACE.com. "They have already demonstrated the docking technology."

And what about that female space traveler onboard Shenzhou 9?

"Sending a woman likely serves the purpose of garnering international media attention more than anything else," Johnson-Freese said, "and domestically pleasing half the population of a country of 1.3 billion … and where Mao said women 'hold up half of heaven.'"

Another step in the long march

"It's a big deal," said Dean Cheng, The Heritage Foundation's research fellow on Chinese political and security affairs. China's 2011 space white paper laid out a list of main program objectives such as a space station by 2020 and initial manned moon shot studies.

"All of these rely on the ability to conduct docking, and require experience in microgravity," Cheng said in an interview.

Cheng said that after Shenzhou 8, the Chinese have demonstrated a basic, unmanned docking capability. But they must do it with people if they're going to use Tiangong 1, deploy a Tiangong 2, much less a space station, or go to the moon. [Giant Leaps in Human Spaceflight]

"Of course, this is only China's fourth crewed mission, so it's also another step in the long march, so to speak, to the stars for the Chinese," Cheng said.

"This is occurring in the context of a troubled Chinese leadership transition," Cheng also noted. "Therefore, any trouble with the mission is likely to have bad consequences for the Chinese leadership, as it might be seen as emblematic of poor leadership, poor stewardship of the nation's vital resources, and raise questions about the legitimacy of the incoming leaders."

According to a new background brief on China's space efforts, Gregory Kulacki, senior analyst and China project manager of the Union of Concerned Scientists' Global Security Program, the upcoming mission is an intermediate step in a 30-year Chinese blueprint to construct a national space station.

China is following the long-term plan it began two decades ago to build a Chinese space station that will be approximately the same size as the first U.S. space station, Skylab, which circled the Earth back in the 1970s, Kulacki said.

"This plan emerged from a contentious internal debate that began in March 1986 and engaged hundreds of Chinese experts in many fields, as well as the leadership of numerous Chinese institutions," Kulacki said.

Furthermore, it will be another decade before China completes its space station, Kulacki said. "A lot of difficult and dangerous work remains to be done. The leadership of China's space program does not appear to be in a hurry and is not rushing to beat the United States to the moon or anywhere else."