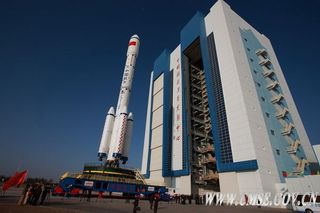 China is only the third country ever to send a person into space. This week the rising space power is set to reach another milestone, launching its first space lab module, an unmanned prototype for a future space station.

China's reach for the stars presents the United States with a choice. America could reach out to cooperate, proposing joint space exploration projects, or it could restrict collaboration and perhaps even decide to pursue a space race akin to the 1960s competition against the Soviet Union.

Experts say there are benefits and pitfalls to either position, and note that the space question is only one  thread in the complex, changing world of Sino-American relations.

In 2003, China joined the very small club of nations, consisting of Russia and the United States, that can launch a person to orbit. The second and third manned Chinese missions came in 2005 and 2008.

Now China is preparing to loft Tiangong-1, a space lab test module, atop a Chinese Long March 2F rocket Sept. 29 or Sept. 30. Tiangong-1 ("Heavenly Palace") will be used in tandem with a spacecraft due to launch later, Shenzhou 8, to demonstrate the first Chinese docking maneuver. [Photos: China's First Space Station]

Though Chinese officials are mum on their long-term goals, it's a poorly kept secret that Beijing is aiming for the brass ring: landing a person on the moon. The Tiangong project is one step in the careful progression toward that goal.

President Barack Obama has challenged the U.S. space agency to begin planning for human missions to an asteroid and Mars. Meanwhile, NASA is handing off to the private sector the burden of sending astronauts to low-Earth orbit and the International Space Station.

All of these new U.S. initiatives will take time. Add China's momentum into the mix, and many in the American space community fear a new space race is something the United States wouldn't necessarily win this time

"The U.S. is currently in a situation of refocusing its spaceflight efforts," said Joan Johnson-Freese, chairwoman of the Department of National Security Studies at the Naval War College in Newport, R.I. "We don't have the political will that China has right now. If there's a race going on, their advantage is through political will, not technology."

While the United States remains the international leader in spaceflight ability, she said, it is unclear whether that will always be the case.

"That's our choice to make," Johnson-Freese said. "That is not a choice the Chinese are going to make for us. We need to decide where we're going to put our resources."

The benefits of teamwork

China's space achievements don't have to be viewed as a threat at all, but rather as an opportunity for collaboration, some experts say. Russia has worked with Beijing's space program and even sold hardware and spacesuits to the Chinese, while other nations also have shown willingness to cooperate. [Infographic: How China's First Space Station Will Work]

The United States, however, has held back.

"The fears are that if we work with China, it would be to their technological benefit," Johnson-Freese said. "But I'm of the view that it's always better to work with people and have some control than have someone off on their own when you're not involved. More engagement with China is the way we learn about China."

However, others warn there are significant dangers in extending an orbital olive branch, especially if that includes sharing U.S. technology and knowledge.

"I think that is a path that runs a great deal of risk unless it's very carefully managed," said Dean Cheng, a research fellow at the Heritage Foundation, a conservative public policy think tank. "We don't know enough about the Chinese space policy system and the very heavy military element that permeates the Chinese space program. When we deal with China on space, we are dealing with their military. That's not necessarily a bad thing, but requires us to go in with our eyes open."

"Most countries expanding their space programs are strong U.S. allies that are primarily interested in advancing science research or building a commercial space industry. The Chinese, however, do not fall into this category," Rep. Frank Wolf (R-Va.) said during a U.S.-China Economic and Security Review Commission hearing in May.

Wolf argued that China's space activities are too tied to its military, whose actions are often at odds with U.S. interests, and added that China's human rights abuses shouldn't be rewarded with cooperation.

"That is why I included language in the Fiscal Year 2011 Continuing Resolution preventing NASA and the Office of Science and Technology Policy from using federal funds ‘to develop, design, plan, promulgate, implement or execute a bilateral policy, program, order, or contract of any kind to participate, collaborate, or coordinate bilaterally in any way with China or any Chinese-owned company,'" Wolf said.

There are indications that the Obama administration and the president's appointed administrator of NASA, Charlie Bolden, would like to get around that ban. John Holdren, director of the White House Office of Science and Technology Policy, told Wolf and other lawmakers that the administration planned to obey the prohibition as long as it didn't conflict with the president's authority to conduct foreign relations.

Cheng said: "I think what we are seeing is a very clear rift between the executive and the legislative branches over just where and how we can and should interact with China in space." [Giant Leaps: Biggest Achievements in Human Spaceflight]

In October 2010, before the official ban on U.S.-China space cooperation, Bolden led a delegation on an official trip to China. Afterward, he issued a statement saying he had accomplished his goals of "becoming acquainted with relevant Chinese space officials and institutions, better understanding Chinese human spaceflight programs and plans, and reaching a common understanding of the importance of transparency, reciprocity and mutual benefit as the underlying principles of any future interaction between our two nations in the area of human spaceflight."

Some critics complained, however, that the trip was shrouded in secrecy and that the exact details of whom Bolden met with and what agreements were made were not clear.

"Some of us keep asking: Who did you to talk to?" said Cheng, who specializes in Chinese political and security affairs. "I think that with the outright point-blank refusal of this administration and Administrator Bolden to tell any of us — the Congress, the public and the press — what happened, it's impossible to speculate."

Yet others see it differently.

Victoria Samson, the Washington office director of the Secure World Foundation, an organization dedicated to the peaceful use of outer space, said there was no mystery about the trip — it simply wasn't a significant event.

"It was just a first step," Samson told SPACE.com. "They signed an agreement. Nothing specific came out of it."

Ultimately, the decision of whether and how to work with China in space must be made in the context of the two countries' larger relationship.

"When we look at just the space issue, it's fairly complex, but when we put it into the context of U.S.-China relations writ large, you very quickly realize this is a giant ball of yarn with lots of threads sticking out," Cheng said.

And that larger relationship is constantly evolving.

"Space is just one part of our relationship with China," Samson said. "Sometimes the other part of the relationship overrides space, which is too bad. It'd be nice if we could try and do something to create an atmosphere of cooperation. I think that by not cooperating with China on space issues, that limits us for ways in which we can try to have an effect on other Chinese policies and programs."