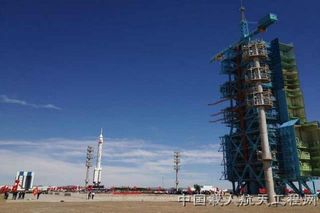 China will launch its first manned mission to an orbiting space laboratory in mid-June, according to state media reports and the country's human spaceflight agency.

A Long March 2F rocket will launch three astronauts aboard a Shenzhou 9 capsule for China's first manned space docking at the mini-space station Tiangong-1. The space lab module has been circling Earth unmanned since its launch last year.

Zhou's comments came as he accompanied the rocket set to launch the Shenzhou 9 mission to a pad at China's Jiuquan Satellite Launch Center in the country's northwest region.

The mission, Zhou told Xinhua, will be a major milestone for China's space exploration program.

Since its first flight, China has launched two more manned missions, the two-man Shenzhou 6 flight and three-person Shenzhou 7 mission. Last September, China launched the Tiangong 1 module — a prototype for a future space station — into orbit. That launch was followed in November by the unmanned Shenzhou 8 mission, which successfully docked a capsule with the space laboratory twice during the test flight.

The Shenzhou 9 mission will mark China's first human spaceflight to an orbiting module. Earlier this year, space program officials said the mission could also mark the first launch of China's first female astronaut, but a final decision on that is pending, Xinhua reported.

A translation of an announcement released online by the China Manned Space Engineering Office (CMSE), which oversees China's human spaceflight program, stated that preparations of both the rocket and Shenzhou 9 astronaut crew are going smoothly.

A series of spacecraft and rocket tests, as well as final mission training, are underway ahead of the planned spaceflight, CMSE officials said.

Like the Soyuz, Shenzhou vehicles carry up to three astronauts and consist of a propulsion module, a crew capsule and an orbital module. But unlike Russia's Soyuz, the orbital module of Shenzhou spacecraft carries its own solar arrays and can remain in space after its crew returns to Earth in the crew capsule.

Chinese space officials have said the country is developing a larger, 60-ton space station that will consist of several modules. That space station is slated to be launched in 2020.

China is currently following a three-step space exploration program that ultimately aims to land an astronaut on the moon. According to a white paper released by the Chinese government in December, the country plans to launch a series of robotic moon landers and a lunar sample-return mission by 2016.