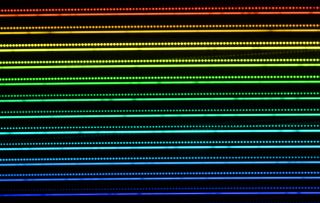 This picture illustrates part of a spectrum of a star obtained using the HARPS instrument on the ESO 3.6-metre telescope at the La Silla Observatory in Chile.
(Image: © ESO)

Astronomers searching for alien planets may be a step closer to finding true Earth-like worlds around sun-like stars, by using a new tool that promises to increase the accuracy of planet-hunting instruments tenfold, scientists say.

The laser frequency comb is a calibration tool specifically designed for large ground-based telescopes that search for alien planets through the "wobble method," which identifies extrasolar planets by the gravitational effect (the wobble) they have on their parent stars.

Today instruments such as the European Southern Observatory's High Accuracy Radial Velocity Planet Searcher (HARPS) spectrograph on a telescope in Chile observe planets via the wobble method. But precision is key, and the hollow cathode lamps used to calibrate those spectrometers have their limitations, researchers said  —  they are not adjustable, can be difficult to gauge, and allow the spectrometers to track the wobble of a star only down to about 30 centimeters per second.

Lo Curto worked with an international team led by Tobias Wilken of the Max Planck Institute to improve the calibration of large telescopes used in wobble method searches.

So far, telescopes using this method, which measures the Doppler shift of starlight, have lacked the precision to identify rocky alien planets that could boast water as they orbit sun-like stars, considered the most likely to give birth to life.

Over the past 20 years, technological advances led to improved measurements that have turned up smaller and increasingly distant planets. The HARPS spectrograph is one of the most recent additions to the alien planet search.

"HARPS is the most stable astronomical spectrograph, and is supplying the scientific community with the most precise Doppler shift measurements of nearby stars," Lo Curto said. "However, this precision is limited, among other factors, by the precision of the calibration."

Wilken, Lo Curto and their colleagues tried out their new laser comb on HARPS. The results are detailed online in the May 31 edition of the journal Nature.

A laser comb for planet-hunting scopes

As its name suggests, the laser frequency comb emits many lines of light spread apart like the teeth of a comb. Because the distance between the teeth is known, the spectrograph, responsible for reading the light from the star, can use the comb to ascertain that it is correctly reading the stellar signal.

The lines are based on an atomic clock and so are as accurate as that clock, Wilken explained. The comb also can be tailored to fit the exact size of the telescope spectrograph that needs calibration, he said.

The team's laser frequency comb can measure shifts as low as 2.5 centimeters per second, a substantial improvement to the cathode lamp approach —  allowing astronomers to see smaller, closer planets, including rocky bodies with the potential of containing water.

Telescopes still would be limited by their aperture, or how much light they can collect. HARPS, even equipped with a laser comb, would capture nothing less massive than Neptune-size planets in the habitable zone around sun-like stars, researchers said.

But larger instruments, such as several giant telescopes currently under development, could fare better. "Future instruments installed at larger telescopes, if equipped with a frequency comb, will have the capability to detect an Earth-mass planet in the habitable zone of a sun-like star," Lo Curto said.