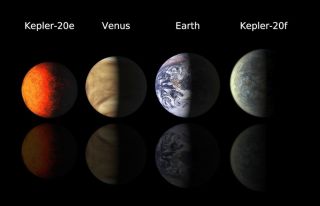 The Kepler space telescope has spied evidence of two Earth-sized worlds in a star system 950 light-years away. [Full Story]

The Kepler space telescope has spied evidence of two Earth-sized worlds in a star system 950 light-years away. This SPACE.com infographic depicts the main features of the planets. [Full Story]

This still from a NASA animation shows the orbits of the five planets residing in the Kepler-20 star system 950 light-years from Earth. The alien solar system is home to two Earth-size planets, the first such exoplanets ever found.

An artist's rendering of the newfound alien planet Kepler-20e, which scientists say is smaller than Earth, at about 0.87 times the width of our planet.

This illustration shows the alien planet Kepler-20f, discovered by NASA's Kepler space telescope. At 1.03 times the width of Earth, Kepler-20f is the second smallest exoplanet yet found.

Astronomers searching for another Earth are getting closer, thanks to recent discoveries by the Kepler space telescope. [See our full infographic on the types of alien planets here.

An artist's interpretation of the Kepler observatory in space.

This star chart illustrates the large patch of sky that NASA's Kepler mission will stare at for the duration of its three-and-a-half-year lifetime. The planet hunter's full field of view occupies 100 square degrees of our Milky Way galaxy, in the constellations Cygnus and Lyra.

Illustration of Kepler alien planet candidates and their host stars

This illustration shows all 1,235 of the potential alien planet candidates NASA's Kepler mission has found to date. The planets are pictured crossing front of their host stars, which are all represented to scale.