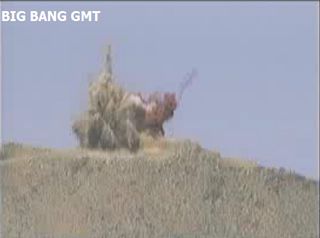 The birth of a giant new telescope began with a literal big bang Friday (March 23), in an excavation blast at the peak of a mountain in Chile — the observatory's future home.

The explosion detonated just before 12 p.m. EDT (1600 GMT) in order to level the mountaintop for the future Giant Magellan Telescope, an 82-foot (24.5-meter) observatory to scan the cosmos in unprecedented detail.  The blast was broadcast live on the Internet by the U.S. Embassy in Chile, and surprisingly occurred a few minutes earlier than planned.

"Well that's what we call a short fuse," a project official said with a laugh just after the explosion, which was timed for high noon and infused with celebratory colors. "It was in three colors. It had red, white and blue, which happen to be the colors of the countries involved in this: Chile, the U.S, Australia and Korea."

The early explosion meant there was no time to mark the detonation with an anticipatory countdown, the official said in the webcast.

The live webcast of the explosion — which project officials dubbed the "Big Bang Event" — apparently drew an unexpectedly large crowd on the Web, with the event organizers moving the broadcast to a Ustream feed in order to handle the excess demand, officials said.

The telescope is being built 8,500 feet (2,550 meters) above sea level atop Las Campanas Peak in Chile's Atacama Desert, a region known for its dependably clear and dark night sky. Construction is expected to be completed by 2018.

"Today marks a historic step toward constructing an astronomical telescope larger than any in existence today," said Wendy Freedman, chair of the Giant Magellan Telescope Organization and director of the Carnegie Observatories, in a statement. "Years of testing have shown that Las Campanas is one of the premier observatory sites in the world and the Carnegie Institution is proud to host the GMT."

More than 70 controlled blasts will be conducted over the next few months to excavate the 3 million cubic feet of rock from Las Campanas Peak to make way for the telescope, officials said. The instrument is being built at the Las Campanas Observatory, which is managed by the Carnegie Institution for Science.

The telescope consists of an adaptive optics system of six circular mirrors surrounding a seventh central mirror. Each mirror segment is 28 feet (8.4 meters) across and weighs 20 tons, Carnegie officials said. They are designed to be adjusted quickly to eliminate the blurring effects of Earth's atmosphere.

Project scientists hope the telescope will, once online, help shed new light on how the birth of the first galaxies and the nature of dark matter and dark energy, among other astronomical mysteries.

One of the telescope's mirror segments is nearing completion and work on a second mirror began in January, project officials said.

“2012 is a banner year for the GMT project as we complete the design process, develop the primary mirrors, and begin work on the site in Chile," said project director Patrick McCarthy of the Giant Magellan Telescope Organization.

The Giant Magellan Telescope is just one of several huge telescopes currently under development, and it is by no means the largest instrument planned.

The world's largest telescope will be the European Extremely Large Telescope, a 138-foot (42-meter) project led by the European Southern Observatory that will also be built in the Atacama Desert. Construction of that $1.43 billion telescope is also slated to begin this year. The Atacama Desert is home to several other astronomy observatories because it often gets 300 days of clear night skies each year.