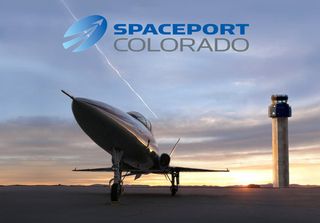 Advocates for Spaceport Colorado are pushing to have the state as a hub of civilian spaceflight activities.
(Image: © Front Range Airport)

Colorado’s mile-high altitude and welcoming attitude could bring a commercial spaceport to the Rocky Mountain state.

Now being eyed as home of the Colorado Spaceport is the Front Range Airport in the city of Aurora, Colo., a site that sits on 4,000 acres (1,619 hectares) of landand is surrounded by 6,000 acres (2,428 hectacres) of nonresidential, privately owned industrial property.

Some Colorado officials are pushing for a spaceport to keep the state engaged in the commercial space industry. If spaceport designation is granted, the next step would be upgrading the Front Range Airport to support space travel. Advocates envision the spaceport handling suborbital space planes and serving as one hub of a worldwide network of suborbital point-to-point travel.

Last December, Colorado Governor John Hickenlooper announced that the state had taken the first step toward becoming a spaceport state by declaring its intent in a letter to the Federal Aviation Administration’s (FAA) Office of Commercial Space Transportation (AST).

Hickenlooper said the effort would help expand Colorado’s competitiveness in the aerospace industry by developing new opportunities for the state to engage in the future growth of commercial space transportation.

In early February of this year, a letter of unanimous support from the full Colorado congressional delegation was sent to the AST that endorsed Front Range Airport as the state’s spaceport.

"A spaceport [allows] us to conceive of flying to Australia in a couple of hours … and that really does begin to revolutionize how we think about, not just travel, but how we do business," Hickenlooper said during an April 19 talk at the 28th National Space Symposium in Colorado Springs. [Vote Now! The Best Spaceships of All Time]

That piece of legislation, in part, grants limited liability to spaceflight companies, allowing spaceflight participants who sign waiver forms to sue only if they are injured or killed as a result of a firm’s "willful or wanton disregard" for safety.

"The potential of horizontal take-off commercial spaceflight facilities in Colorado would soon position Colorado as the hub of civilian spaceflight activities in the country, similar to the status held by Cape Kennedy and Houston," the bill states.

In followup action, a trio of architectural firms has been shortlisted this month in response to a Front Range Airport Request for Qualifications for spaceport consultants.

Dennis Heap, executive director of the Front Range Airport, is a veteran in the regional airline business. He has managed the airport for the last 18 years and is a leading champion of the site being given spaceport status.

"Airports are changing the way they do business, because outside pressures have dramatically changed airports — specifically, general aviation airports," Heap told SPACE.com.

Heap noted that, over the past years, the number of takeoffs and landings at Front Range Airport has certainly seen its ups and downs.

"Last year, our traffic was at 21 percent of our runway capacity," Heap said. "Under normal conditions, a facility that is grossly underutilized would not have a good future. However, Front Range Airport weaknesses are now seen as a strength, giving us a once-in-a-lifetime opportunity to become a spaceport."

Front Range has excess capacity that could be used for unconventional vehicles like space planes and unmanned aerial vehicles, Heap noted. The Front Range airport is fairly remote, yet conveniently close to Denver International Airport (DIA), which is the world's 10th-busiest. It's also within commuting distance for the skilled workforce that lives in the Denver metropolitan area, he said.

"Spaceport Colorado has the full support of the governor, the entire Colorado congressional delegation and DIA," Heap said.

Heap said that in his 38 years of aviation experience, he has not experienced anything as exciting or energizing as "New Space."

"A spaceport here in Colorado could make a ton of sense, but only if done right," said Jonathan Goff, president and CEO of Altius Space Machines in Louisville, Colo.

"The key is going to be finding a way to diversify so they’re not dependent on winning business from just one or two customers," Goff told SPACE.com. "It sounds like some of the people trying to make this spaceport happen are moving in that direction."

Goff said that the key is going to be finding out how to work with the FAA to allow suborbital rocket flights within the Class B airspace around DIA, without having to close the airspace.

"Colorado is a nice place to live, and has plenty of advantages, but they’re only going to get customers out here if they can get things worked out with the FAA in a way that allows those customers the freedom to operate," Goff said.

Any focus on suborbital point-to-point travel is premature, Goff advised. The technology needed to support that spaceport activity, "while not truly impossible, is also really, really hard," and isn’t going to happen anywhere near as soon as is being presented, he said.

"The regulatory and logistical challenges — remember, you need a spaceport on both ends of every suborbital point-to-point route— are going to take a while to address," Goff said.

"If Colorado could find a way to accommodate VTVL companies as well, that would be even better…and could likely bring some of that business to the state as well," Goff said.

"I think it is an excellent sign for the commercial space industry that we are seeing great interest in additional spaceport development projects," Anderson said. "Our experience is relevant to building a spaceport literally from the ground up. Others may have a different experience in repurposing existing facilities."

As for advice to prospective spaceport developers, Anderson added: "Whichever path you are pursuing, I would just say, it will be a challenging job … but one with great opportunities and rewards for the individual states and for our nation."