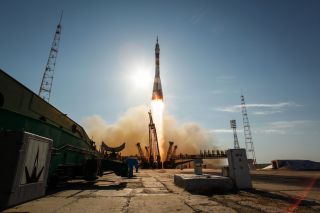 The Soyuz TMA-04M rocket launches from the Baikonur Cosmodrome in Kazakhstan on Tuesday.
(Image: © NASA/Bill Ingalls)

An American astronaut and two Russian cosmonauts arrived at the International Space Station early Thursday (May 17), kicking off a four-month stay aboard the orbiting laboratory.

A Russian Soyuz spacecraft carrying NASA astronaut Joe Acaba and cosmonauts Gennady Padalka and Sergei Revin docked with the space station at 12:36 a.m. EDT (0436 GMT) Thursday as the two spacecraft soared 249 miles above the border between Mongolia and Kazakhstan.

For Acaba, the docking came as a welcome birthday present to mark his 45th birthday, NASA commentator Rob Navias said.

The three spaceflyers floated through the orbiting lab's hatch at 4:10 a.m. EDT (0810 GMT), bringing the station back up to its full crew of six. Their fellow Expedition 31 crewmembers — NASA's Don Pettit, Dutchman Andre Kuipers and cosmonaut Oleg Kononenko — had had the $100 billion orbiting complex to themselves since April 27.

Acaba, Padalka and Revin launched Monday (May 14) from the Baikonur Cosmodrome in Kazakhstan. They were originally scheduled to blast off on March 29, but a botched pressure test cracked their Soyuz capsule, causing a six-week delay while another spacecraft was readied. [See Spectacular Soyuz Launch Photos]

The three new arrivals will live and work aboard the space station for four months, returning to Earth in mid-September. All will serve as flight engineers under Kononenko, the commander of the Expedition 31 mission.

Kononenko, Pettit and Kuipers boarded the orbiting lab in late December and are scheduled to depart on July 1.

Acaba has visited the station once before, on the space shuttle Discovery's STS-119 mission in 2009. But that flight lasted just 13 days, so a long-duration stay in orbit will be a new experience for him. He said he's looking forward to helping advance our knowledge of how to live and work for long periods off the planet.

"There’s still a lot we don’t know about living in space, so for me personally and professionally it’s really neat to be part of that and know that you’re kind of contributing in a small way," Acaba said in a pre-flight interview with NASA officials.

Living aboard the station will be even more novel for Revin, who had never been to space before Monday's launch. Padalka, on the other hand, is an experienced spaceflyer with two long stints on the station under his belt. He will become commander of the station's new Expedition 32 mission when Kononenko, Pettit and Kuipers leave in July.

The six astronauts will get to witness a historic event very soon, if all goes according to plan. The private spaceflight company SpaceX plans to launch its robotic Dragon capsule toward the station this Saturday (May 19).

The flight is a demonstration mission, to see if Dragon and SpaceX's Falcon 9 rocket are ready to begin a series of 12 contracted unmanned supply runs for NASA. If the test mission succeeds, it will mark the first time a private vehicle has ever docked with the orbiting lab.