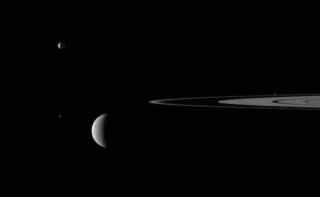 A spectacular new video combines NASA images of the Saturn and Jupiter systems into an eye-popping montage of moons, rings and swirling otherworldly storms.

The video strings together photos snapped by NASA's Voyager and Cassini spacecraft, according to its creator, Netherlands-based freelance editor Sander van den Berg. He posted the black-and-white piece, called "Outer Space," earlier this month on the video-sharing site Vimeo.

"Outer Space" begins with close-up shots of Saturn's iconic rings, then pans out to show them whirling in space like a gigantic cosmic buzzsaw. Some of Saturn's many moons occasionally zip through the field of view as they journey around the huge planet.

The video focuses for a few seconds on one of the most intriguing of these moons, the ice-encrusted Enceladus. Icy plumes of water vapor, salts and carbonates spew from the south polar region of Enceladus, which many researchers think harbors a deep subsurface ocean of liquid water.

"Outer Space" also shows huge storms racing through the atmospheres of both Jupiter and Saturn, cosmic hurricanes that dwarf anything we experience here on Earth.

The twin Voyager spacecraft launched a few weeks apart in 1977, tasked primarily with studying Saturn, Jupiter and the gas giants' moons. The probes made many interesting discoveries about these far-flung bodies, including spotting live volcanoes on Jupiter's moon Io — the first time such current geophysical activity had been observed beyond Earth.

And then the spacecraft just kept going, checking out Uranus and Neptune on their way toward interstellar space. Both are now actively observing the strange environment at the edge of the solar system; Voyager 1 is about 11 billion miles (18 billion kilometers) from Earth, and Voyager 2 is 9 billion miles (15 billion km) from home.

The $3.2 billion Cassini mission launched in 1997 and arrived at Saturn in 2004. The spacecraft has been studying the ringed planet and its many moons ever since, and will continue to do so for years to come. Last year, NASA extended the probe's mission to at least 2017.