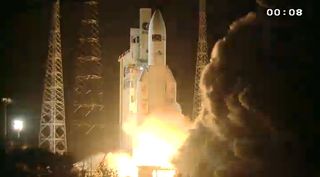 A huge robot European cargo ship launched to the International Space Station today (March 23), lighting up the night sky over the northeast coast of South America to begin a five-day journey to deliver key supplies to the orbiting outpost.

The European Space Agency's third Automated Transfer Vehicle (ATV-3) lifted off at 12:34 a.m. EDT (0434 GMT) atop an Ariane 5 rocket from Europe's spaceport in Kourou, French Guiana. After a brief light show, the rocket slipped through a cloud layer and soared into orbit.

The 13-ton cargo freighter is loaded with about 7.2 tons of supplies, including food, water, clothing, experiments and fuel for the space station, according to NASA. The unmanned ATV-3 is the heaviest load of cargo ever delivered to the station by a robotic spacecraft, ESA officials said in a statement.

"This is just the start of a very long journey which will take the Edoardo Amaldi into space for about five months," ESA Director-General Jean-Jacques Dordain said after the successful launch. "It's a good start; a very good start." [Dazzling Night Launch Photos of Europe's ATV-3]

The ATV-3 is nicknamed "Edoardo Amaldi" after the famed Italian physicist and spaceflight pioneer who is credited with helping to create the European Space Agency. Amaldi is also one of the founding fathers of CERN, the particle physics laboratory along the Swiss-French border that houses the Large Hadron Collider.

The cylindrical spacecraft is 35 feet (10.7 meters) long and 14.7 feet (4.5 meters) wide - large enough to fit a double-decker bus inside. Europe's disposable ATVs are designed to automatically dock to the Zvezda module on the Russian portion of the International Space Station.

The cargo ships then remain attached to the complex for up to six months before they are packed with garbage and deliberately sent to burn up during atmospheric re-entry.

The European ATVs are part of an international fleet of disposable robot cargo ships that are used to transport hardware and critical supplies to the space station. Russia's unmanned Progress ships and Japan's H-2 Transfer Vehicles (HTVs) also regularly ferry cargo to the orbiting outpost.

ESA routinely names the ATV vehicles after historical figures that were influential to astronomy or space exploration. The agency's first ATV, named Jules Verne, made its maiden voyage to the space station in 2008. The ATV-2, dubbed Johannes Kepler, launched in 2011.

The ATV spacecraft are not the only vehicles launched into orbit by Arianespace out of the European spaceport in French Guiana. Earlier this year, ESA's first Vega rocket, which is smaller than the Ariane 5 and is built to loft small satellites, blasted off from the space center. Last year, Arianespace also began launching Russian-built Soyuz rockets on unmanned missions from the South American site.

"We are now a significant space power," Dordain said. "I can say that."