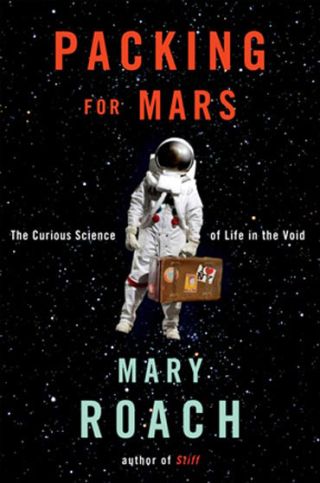 The new book "Packing for Mars," by Mary Roach, arrives at a time when the future of U.S. manned space travel lies at a crossroads. Despite the title, the book doesn't chiefly outline a proposed manned mission to Mars. Instead, it delves into the minutiae of human spaceflight.

It might serve as a good primer on the subject for novices, with amusing anecdotes that entertain, though most of the material may come as a rehash for long-time space enthusiasts.

NASA has set the space shuttle program to retire in 2011, and Congress is discussing the agency's new plan to visit an asteroid by 2025, and also to use privately built space taxis (once they're available) to fly astronauts to the International Space Station. Because of its timing, Roach's book has an opportunity to reignite public interest in the topic.

"Packing for Mars" (published Aug. 2 by W.W. Norton) stands poised for long-term success like previous outings by Roach ("Bonk," "Spook," and "Stiff"). The author tends to fix on the freakish, absurd aspects of space exploration, which will likely prove entertaining for a general audience, but maydilute some of the book's impact for die-hard spaceflight fans.

One can't fault Roach's research, as she trekked to many places even the most hardcore space fan would find difficult to reach, including testing facilities of the Japan Aerospace Exploration Agency, Russia's Star City (home of the cosmonauts), the New Mexico Museum of Space History, and NASA's Johnson Space Center and Ames Research Center; she even tagged along on a simulated Mars rover sojourn on Canada's Devon Island.

Not unexpectedly, a chapter on the author's flight aboard NASA's former C-9 parabolic training aircraft includes a photo of Roach floating in mid-air. Indeed, at no point will readers forget that Roach is writing a book about space exploration: She inserts herself into the story often, even comparing a spaceflyer's detailed schedule to a book tour, and throughout devoting many lines to the circumstances of her interviews.

Roach admits in the acknowledgments, that she has "no background in space or aeromedical matters," an admission that should raise some eyebrows among the seriously interested. However, for the most part, she's done the research and discusses science solidly.

Taking into account the non-specialized audience that clearly represents her target, Roach includes brief explanations of black holes, zero gravity, and basic physics principles. However, her faith in the reader's attention span is such that she laments that an explanation of gravity will have likely been forgotten a few pages later. After all, what ordinary person could bother to comprehend gravity?

Of course, Roach builds suspense before answering the perennial favorite question: How do astronauts go to the bathroom in space?

The author keeps readers hanging until almost the last chapter, but when her explanation finally comes, no detail is left unexplored. Much hilarity ensues from the graphic description of outer space elimination using zero-g toilets.

In most cases, Roach's deadpan approach to space exploration allows the inherent humor of the field's absurd experiments to come through. Yet at times she peppers the discussion with intermittently funny jokes in the manner of a standup comedian trying out new material. Many pages sprout tangential or even off-topic footnotes, scavenged from the author's research with the fervor of an anxious dinner date lobbing conversation topics at the first sign of restlessness.

Though she did due diligence research in most areas, Roach hasn't included the voices of any representatives of the now-burgeoning private spaceflight industry, which is expected to launch people into space in upcoming years. Conversations with Virgin Galactic's Sir Richard Branson, SpaceX's Elon Musk and others could have made for colorful copy.

The author fills her prose with breezily conversational phrases such as "It's my Wha? face," regarding Roach's reaction to Japanese toilets, or, in response to viewing Sylvia Saint in the infamous Uranus Experiment pornographic film: "Without gravity, there should be no hangy-downy."

Ultimately, though the author's presence looms over the book, a sense of obligation on her part also infuses the proceedings. By the final page, when she mildly asserts that our country should pursue Mars exploration with the concluding phrase, "Let's go out and play," that exhortation that seems less like a clarion call for discovery, and more like a student's sigh of relief at the end of the term.