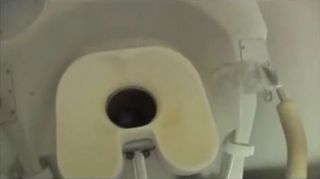 The "positional trainer" space toilet is for practice only, as it does not function. Hole diameter = 4 inches.
(Image: © NASA)

For astronauts, cranking out physics equations to calculate spacecrafttrajectories and withstanding the bone-jarring forces of a rocket launch are asnap. But learning how to use the space shuttle's toilet? That's tricky.

To that end, NASA has a specially designed training room at the JohnsonSpace Center in Houston where astronauts can carefully hone their"technique" before departing on a trip to orbit. Astronaut Michael Massimino put the space potty trainer in the spotlight in abehind-the-scenesvideo with the six-man crew of NASA's current shuttle mission ? going onnow ? on the shuttle Atlantis.

"You know what I think of? I think of Peter Fonda in 'Easy Rider'riding a chopper," Massimino said of hispreferred space toilet position, holding his arms up to grip the handles of animaginary motorcycle. "That's the right position for me."

There are differentspace toilets for different spaceships. A Russian design similar to the shuttle's is used on the International Space Station, whereAtlantis is currently docked. Other systems are used on Russian Soyuzspacecraft and China's Shenzhou crew vehicles.

The positional trainer is not a working toilet, but is otherwise an exactreplica of the spacetoilet on the shuttle. The opening in the seat is just four inches wide.(Standard, earth-bound toilets have openings measuring 12 or 18 inches.)

And that's not all. There's a small camera inside ? just under the rim ofthe opening ? and the feed from the camera runs to a monitor just a few feet infront of the seat. Sitting here, space-flyers can make sure that their bodiesare positioned so that solid waste will fall through the seat's small opening.

"Alignment is important," said Scott Weinstein, a crewhabitability trainer at NASA, as he explained the contraption during a NASA TVbroadcast. "If they're not confident that they have good alignment,"he said, astronauts can sit down on the seat, flip on the camera, and check tosee if they've got it.

When space-flyers have mastered the proper alignment, they can move tofunctional trainer. This is a workingtoilet, equipped with the same airflow vents used on the space shuttle.Here, astronauts practice how to eliminate both urine and solid waste.

How the space toilet works

On the shuttle, urine is handled differently than solid waste, so it doesn'tgo through the 4-inch opening. Instead, a long hose with suction power attachesbeside the seat, and each astronaut attaches her or her own funnel forurination to this hose.

Funnels are different for men and women.

Women need to place the top of their funnels directly against their bodies,so the sides of the female funnels need to be vented so that air can flow inwhen the suction is turned on, Weinstein explained. And women can choose amongthree funnels with differently shaped tops ? there are two funnels withoval-shaped tops and one with a circle-shaped top.

Male funnels are simpler. They only come in one shape ? the top is circular? and they do not have venting.

"For men, we do not want them ? docking to the funnel," saidWeinstein, so male funnels do not need venting at the top to let in air.

Lastly, for paper waste, a separate suction hose on the side of the toiletcan be fitted with a larger cup and lined with a plastic bag.

Straps on the foot rest can help to hold an astronaut in place, and thereare two thigh restraints on the sides of the toilet that can be swung over thetop of the legs to help a person stay down on the toilet. But not everyone usesthem.

Before the most recent Atlantis mission, astronauts gathered in the room andcompared their techniques for staying in position when they are weightless.

"I stick my hands on the roof," said astronaut Piers Sellers,pressing his hands palm-up over his head.

The thigh restraints are helpful as handles for getting in and out of thetoilet, said astronaut Steve Bowen, but he also uses the low roof over thetoilet to stay in position.

Massimino followed Atlantis' astronauts as theytrained for a 12-day mission to the International Space Station.

The mission, which launchedlast week, is expected to be the final flight of Atlantis as NASA preparesto retire its shuttle fleet this year. Just two more shuttle missions remainafter this one.