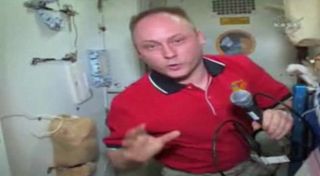 The newestbathroom aboard the International Space Station will have to wait for a vitalroad test, even though the space shuttle Discovery?s crew has more than tripledthe orbiting lab?s population.

Spacestation commander Michael Fincke sent Discovery?s crew a video tour of thestation?s new bathroom when plans were in place to have the astronauts aboardhelp test the space toilet?s capacity to make sure it was ready to support sixlong-term residents. While Fincke?s crew currently numbers three astronauts,the station is slated to double its occupancy up to six people in late May.

?You guysare going to get to try it out,? station commander Michael Fincke toldDiscovery?s crew in a recent videotour of the new bathroom.

A NASAspokesperson said the toilet is available for use by astronauts aboard thestation, but won?t be tested for its capacity during the eight days Discoveryis docked at the orbital lab. The shuttle launched to the space station lateSunday to deliver the last piece of the outpost?s backbone-like main truss, afinal pair of U.S. solar arrays and new station crewmember Koichi Wakata ofJapan.

NASAofficials said that installing the spare part to revive the urine recycler tookprecedence over the space toilet test during Discovery?s flight.

Deliveredlast November, the space station?s new bathroom fits in a wall space about thesize of a large refrigerator. It is based on a Russian design, cost about $90million and has a complicated-looking instruction panel complete with buttonsand lights.

An emblemon its back wall shows a spacewalking astronaut with a roll of toilet paper inhand and the slogan ?Orbital Outhouse Team.?

?Some finefolks in Russian and the United States built it,? Fincke said.

Thisestation?s new bathroom is installed in the outpost?s American segment. It was awelcome addition to the station, which for nearly a decade housed two andthree-person crews with only one bathroom in its Russian-built segment. (Of the10 astronauts now on station, those who don't use the new bathroom can use theold one or Discovery?s own space commode.)

The newbathroom was installed alongside extra life support, kitchen and exercise gear,also aimed at dealing with larger permanent crews.

So exactlyhow do you go to thebathroom in space? Very carefully, and by the book, Fincke said.

?We havetwo kinds of toilet paper, Russian-style and American-style,? Fincke said inhis video tour. Wet wipes are also available and, like bathrooms on Earth,there?s a handy trash bag and a stash of extra supplies.

Unlike onEarth, there?s no gravity in space to help flush waste down a toilet. Instead,astronauts rely on fans and airflow to carry waste away for disposal.

One vital caution from Fincke: if the big red light pops up,call a station crewmember. It means the urine tanks are full.

?We monitorthose pretty carefully, so hopefully it should never be a surprise to us,?Fincke said in his video. ?But with a lot of people, you never know.?