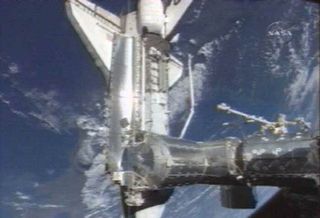 A camera outside the International Space Station reveals the shuttle Discovery just after its March 17, 2009 docking during the STS-119 mission.
(Image: © NASA TV.)

The spaceshuttle Discovery arrived at the International Space Station Tuesday after atwo-day chase, linking up with orbital lab to deliver the last piece of the outpost?sU.S.-built power grid.

The solararrays and their 16-ton support girder are the last major American addition tothe International Space Station and will complete the outpost?s 11-piece maintruss, which serves as the outpost?s backbone. They are the station?s fourthset of the U.S. solar arrays, with wings that are each 115 feet (35 meters)long when unfurled.

Latertoday, Wakata will move a customized seat liner out of Discovery and into aRussian Soyuz spacecraft docked at the station. The move - which prepares aseat for Wakata on the Soyuz should he need it - formally marks his replacementof NASA astronaut Sandra Magnus as a station flight engineer. During histhree-months aboard, Wakata will watch over the station?s Japanese Kibolaboratory built by the Japan Aerospace Exploration Agency (JAXA).

?This is agreat accomplishment for Japan,? said Kuniaki Shiraki, an executive director with JAXA, late Tuesday. ?We hope that he enjoys his stay.?

Magnus willreturn to Earth aboard Discovery to complete a four-month mission, with Wakatadue to land aboard a different shuttle in about three months in orbit..

Discoveryis also delivering a load of supplies to the space station, including a vitalspare part for the outpost?s urine recycling system and equipment to helpeliminate bacteria in a new water dispenser. The repairs are expected to fix thestation?s water recycling system and help the outpost support larger,six-person crews later this year.

Before theshuttle docked, Archambault flew the spacecraft through an orbital flip 600feet (183 meters) below the space station so astronauts inside the outpost couldphotograph the thousands of heat-resistant tiles covering the shuttle?s belly.

Analysts onEarth will study the images from today?s survey to look for any signs ofdamage, though Fincke said an early look found Discovery in good health.

The surveyis followsa Monday inspection of Discovery?s wing edges and nose cap by the shuttleastronauts. It is one in a series of checks that have become standard after the2003 loss of the shuttle Columbia and its astronaut crew due to heat shielddamage. A third survey of Discovery?s heat shield will be performed next weekafter the shuttle leaves the space station.

Aside froma slight delay due to a communications glitch and the need to tweak Discovery?sapproach to keep it aligned, Tuesday?s docking went smoothly.

NASAtrimmed a day and a spacewalk from Discovery?s initial 14-day andfour-spacewalk flight due to delays launching the spacecraft last week.

Missionmanagers want to complete the shuttle?s construction flight before the arrivalof a Russian Soyuz spacecraft carrying two new station crewmembers and Americanspace tourist Charles Simonyi, who is paying more than $30 million for hissecond trip into orbit. The Soyuz is scheduled to launch on March 26 and arriveat the space station on March 28, the same day Discovery is due to land.