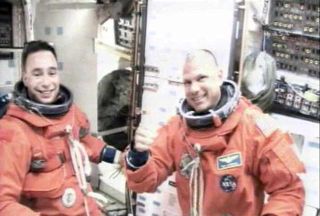 The seven astronauts aboard NASA?s space shuttleDiscovery are headed for the International Space Station on a busy constructionflight. But for nearly half of the shuttle?s crew, the frenetic pace only addsto what is likely an exhilarating, though until now alien, experience: life inzero gravity.

They are thespaceflight rookies of Discovery?s crew - shuttle pilot Dominic"Tony" Antonelli and teachers-turned-astronauts Joseph Acaba andRichard Arnold II. Each said before flight that they were eagerly awaitingtheir construction flight to the International Space Station, especially sinceit came after years of training and pointers from their veteran crewmates.

"You really kind of rely a lot on word ofmouth," Arnold said before launching into space on Sunday. "We havesome experienced folks on this crew and they?ve just been a wealth ofinformation on some things that you wouldn?t otherwise learn."

Arnold and his crewmates are delivering the last set ofU.S.-built solar arrays to the space station, where they plan to perform threespacewalks and swap out one member of the outpost?s Expedition 18 crew duringthe 13-day mission. Discovery is due to dockat the space station later today at 5:13 p.m. EDT (2113 GMT).

"Everyone did just great in their first day on orbithere," Archambault radioed down to Mission Control late Monday night."It really went well."

"I was really honored to do that presentation forTony," he said.

Discovery?s four spaceflight veterans shared some vital,if basic, details of living in space that might have slipped through NASA?sregime, Arnold said in a preflight interview. The potential for space sickness,a regular symptom of space adaptation, aside, there were other questions on theminds of first-time flyers.

"How do you clean up in the morning? Where do youkeep your stuff? We?re allowed to pick out our clothing locker and what kind ofclothes we need, what kind of clothes do you take?" Arnold explained."What?s the temperature going to be like? Just basic day-to-daykind of stuff that you can?t train?someone has to kind of tell you."

So how do you get dressed in space in the morning whenit?s your first trip without gravity?

"The big thing is you want to minimize the [number]of clothes you use, because you have a daily kind of washcloth," Arnoldsaid. "You have teeth to brush, you have to shave and you?ve kind of gotto get cleaned up, too, using that washcloth. So you want to minimize suppliesso that by the time the washcloth is done you?ve used it as efficiently aspossible."

With one washcloth, Arnold said, the key is to planahead.

Archambault, who is making his second spaceflight asDiscovery?s skipper, said the lesson doesn?t even end at night. He vividlyremembers his introduction to bedtime in space during his first flight in 2007.

"The first night in space, I had a horrible night'ssleep just because I was trying to get used to floating in air," Archambaultsaid before launch. "The first night, you?ve got a lot on your mind?it?s abeehive of activity."

But later, as the busy mission schedule kicks in,sleeping becomes a joy and relief after a long day of work, he added.