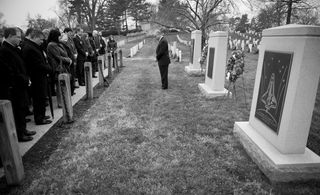 NASA Administrator Charles Bolden, NASA personnel, and others, participate in a wreath laying ceremony as part of NASA's Day of Remembrance, Thursday, Jan. 26, 2012, at Arlington National Cemetery. Wreaths were laid in memory of those men and women who lost their lives in the quest for space exploration.
(Image: © NASA/Bill Ingalls)

This week, NASA is paying tribute to fallen astronauts who lost their lives in the pursuit of space exploration by holding a remembrance ceremony today (Jan. 26) at the Kennedy Space Center in Florida.

Today's Day of Remembrance will honor the 45th anniversary Friday (Jan. 27) of the three astronauts who died in a fire at the launch pad while training for the Apollo 1 mission. The tribute ceremony also marks 26 years since the fatal shuttle Challenger accident on Jan. 28, and nine years since the loss of shuttle Columbia and its crew on Feb. 1.

"NASA's Day of Remembrance was actually started after the Columbia accident," agency spokesman Allard Beutel told SPACE.com. "By pure happenstance, the three high-profile accidents at NASA related to astronauts happened at relatively the same time of the year, separated by years, but all within a few days of each other. It was decided that NASA would put aside the last Thursday of January — whatever that date happens to be — to pay tribute."

And while the Day of Remembrance is a solemn event, it also serves as a reminder to remain vigilant and careful in the pursuit of space exploration, he added.

"It's obviously somber, but it's also a time when people seem to renew their commitment to doing their personal best to make sure that there isn't another accident," Beutel said. "Spaceflight, by its very nature, is inherently risky. It always will be, but you do your personal best. There's a story that goes around NASA that says, 'it won't fail because of me.' Everyone takes that attitude." [The Apollo 1 Fire: NASA's First Disaster]

During the ceremony at the Florida spaceport, NASA officials, including Kennedy Space Center director and former astronaut Bob Cabana, will participate in a wreath-laying at 10:30 a.m. EST (1530 GMT) at the Space Mirror Memorial at the Kennedy Space Center Visitor Complex.

"It's open to the general public and to all Kennedy employees throughout the day," Allard said. "Typically, during the ceremony itself, there could be in the neighbourhood of 50 to 60 people gathered around, but NASA employees can stop by the Space Mirror Memorial any time to pay tribute to NASA's fallen."

President Obama also released a statement joining NASA in its Day of Remembrance.

"It is important to remember that pushing the boundaries of space requires great courage and has come with a steep price three times in our Nation’s history – for the crews of Apollo 1 and the space shuttles Challenger and Columbia," Obama said. "The loss of these pioneers is felt every day by their family, friends, and colleagues, but we take comfort in the knowledge that their spirit will continue to inspire us to new heights."

Obama added that these lives will be remembered as the country continues to reach for new heights in space exploration.

"Today, our Nation is pursuing an ambitious path that honors these heroes, builds on their sacrifices, and promises to expand the limits of innovation as we venture farther into space than we have ever gone before," he said in a statement. "The men and women who lost their lives in the name of space exploration helped get us to this day, and it is our duty to honor them the way they would have wanted to be honored – by focusing our sights on the next horizon"

Apollo astronauts Virgil I. "Gus" Grisson, Edward H. White II and Roger B. Chaffee perished in NASA's first major tragedy on Jan. 27, 1967. A fire broke out in the Apollo 1 module during a ground test at the launch pad about a month before the scheduled launch.

An accident review board was unable to conclusively determine the cause for the fire, but design flaws were blamed for the module's flammability. The tragedy prompted redesigns of the Apollo capsule and agency-wide procedural changes.

An investigation into the disaster showed that exceptionally cold weather had caused a seal, called an O-ring, on the shuttle's right solid rocket booster to fail at liftoff. This allowed pressurized hot gas to escape from inside the booster, which damaged the attachment between the booster and the orbiter.

Seventy-three seconds into Challenger's 10th flight, the external fuel tank exploded and the orbiter broke apart. The seven astronauts were killed when their crew cabin hit the Atlantic Ocean.

On Feb. 1, 2003, NASA suffered another space tragedy when the space shuttle Columbia broke up over Texas on its return home at the end of the STS-107 mission.

Following the accident, studies showed that a piece of foam insulation from Columbia's fuel tank broke off during launch and hit the orbiter's left wing, damaging the heat shield.

In addition to NASA's fallen astronauts, the Day of Remembrance was designed to honor the deaths of others in the agency as well.

"It's for the astronauts, but it's also intended to be for all members of the NASA family who lost their lives supporting space exploration," Beutel said. "These are the people who died supporting the cause of spaceflight. It's a time to reflect and reinforce that this is dangerous and difficult, but it's worth doing. If everyone does their personal best to not let things fail because of them, then it makes the entire cause of space exploration a little safer and a little better."