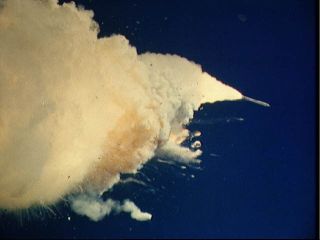 In the span of a week, NASA is observing its three darkest moments in spaceflight, including today's 25th anniversary of the space shuttle Challenger disaster.

Seven astronauts died Jan. 28, 1986, when Challenger was destroyed just after liftoff. It was NASA's first in-flight calamity, and it dealt an especially severe blow to the millions of teachers and students watching on TV to see Christa McAuliffe, a civilian high school teacher from New Hampshire, become NASA's first Teacher in Space.

That commemoration comes a day after the 44th anniversary of the Apollo 1 disaster, when three astronauts died in a fire that broke out inside their module during a ground test roughly a month before launch. And Feb. 1 will be the eighth anniversary of the space shuttle Columbia accident, in which seven astronauts died when the shuttle broke up in the skies over Texas during the return from orbit.

"It becomes a bit of a somber time," said Wayne Hale, a former space shuttle program manager and flight director who was working at NASA during both space shuttle accidents. "Those of us that lived through these events certainly remember where we were, what we were doing, and what we might have done differently. Because I think there isn't a single one of us that was in the human spaceflight program when any of these events happened that doesn't wish that we could go back and change something, make it different, do something different."

The loss of Challenger was later attributed to a failed seal on one of the space shuttle's solid rocket boosters. An investigation board concluded that cold weather prevented a rubber O-ring from maintaining its seal, allowing hot gas to leak and damage the shuttle's external fuel tank and the hardware attaching the booster to the vehicle. The right solid rocket booster separated from the shuttle, and the fuel tank broke apart, causing the orbiter to be torn apart by aerodynamic stresses.

"The problem was a design flaw, complicated by the weather situation which was unrecognized at the time by the appropriate managers," Hale said. "We wished that we had the foresight to stand up collectively and say, 'Look, it's too cold a day to launch, we just ought to wait for a warmer day.' In retrospect it seems so simple; at the time, it just didn't happen."

Many in the spaceflight industry say the anniversaries are a reminder to stay vigilant for potential pitfalls and keep striving to make space travel as safe as possible.

"The major lesson is really, I say to the team, 'Stay hungry,'" said Bill Gerstenmaier, NASA's associate administrator for space operations. "Another way to think of that it is to stay curious. When you see some small little event that appears innocuous or doesn't appear like a big deal, to really investigate that item that occurred. In almost all accidents, if you look back, there are indications ahead of the actual accident that something wasn't operating exactly the way we thought it was. We didn't fully investigate that to the extent we really needed to."

Columbia was destroyed when the shuttle's heat shield failed to protect it from the intense heat of re-entry to Earth's atmosphere. An investigation found that a relatively small chunk of foam insulation from the shuttle's external tank had fallen off during liftoff 16 days earlier and struck the leading edge of the orbiter's left wing.

While engineers at the time didn't believe that the lightweight foam could inflict damage on the reinforced surfaces of the wing, tests later showed that, at the relative speed at which the foam was falling during launch, it probably punched a hole about the size of a dinner plate in one of the wing's panels, allowing hot plasma to damage its internal structure.

Few suspected during Columbia's two weeks in orbit that the shuttle had been harmed, and space shuttle crews now conduct a thorough examination of their orbiter's heat shield after every launch to make sure foam or other debris hasn't damaged the vehicle.

"It certainly was a total misunderstanding of the loss of foam and the damage it could do to the space shuttle orbiter," Hale said. "People were trying to do their job to the best of their ability; it's just that there were holes in their outlook."

The Apollo 1 fire, the first fatal accident for NASA astronauts, was eventually attributed to a number of design and construction flaws in the space capsule. In particular, a review board determined that the presence of large amounts of Velcro and other flammable materials made the capsule extremely vulnerable to fire. In addition, the latched and pressurized hatch of the capsule was not designed for a quick escape.

The calamity led to a thorough redesign of the Apollo capsule before any subsequent missions.

Veteran shuttle astronaut Ron Garan, who is slated to fly to the International Space Station in March aboard a Russian Soyuz spacecraft, said the anniversaries of Challenger and the other accidents highlight the lessons learned from those events.

"It's a time to reflect and it's a time to remember those people who have sacrificed to get us where we are," Garan told SPACE.com. "A lot of the lessons learned in this business are written in blood, and if we don't learn from them, those people died in vain."