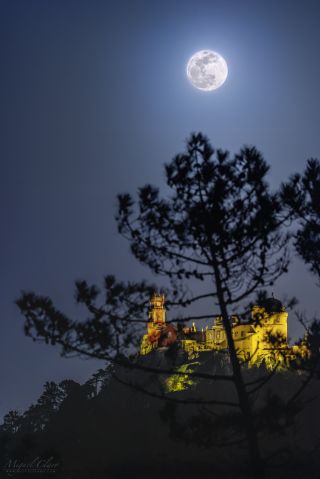 Miguel Claro is a professional photographer, author and science communicator based in Lisbon, Portugal, who creates spectacular images of the night sky. As a European Southern Observatory Photo Ambassador, member of The World At Night, and the official astrophotographer of the Dark Sky Alqueva Reserve, Claro specializes in astronomical "skyscapes" that connect  Earth and night sky. Join him here as he takes us through his photograph "A Mysterious Palace in Heaven."

This image is a composite of two single exposures taken at the same location, position and time, in order to reveal both the moon's surface features and the brightly lit exterior of the Pena Palace. Originally built as a chapel in the Middle Ages, the site has since served as a monastery and a summer home for Portugal's royal family, according to portugalvirtual.pt. The palace is now a museum, a national monument, a UNESCO World Heritage Site, and one of the Seven Wonders of Portugal.

Shining above the castle in this image is the full moon of February, which according to folklore is nicknamed the "Super Snow Moon." A supermoon happens when the moon becomes full around the same time that it reaches perigee, or the point in its elliptical orbit at which it is closest to Earth. This makes the moon appear up to 14% larger and 30% brighter than the average full moon. The term "Snow Moon" was originally a Native American name for the full moon of February because it was the month that brought the heaviest snowfall, according to the Old Farmer's Almanac.

Editor's note: If you have an amazing night-sky photo you'd like to share with us and our news partners for a possible story or image gallery, please contact managing editor Tariq Malik at spacephotos@space.com.