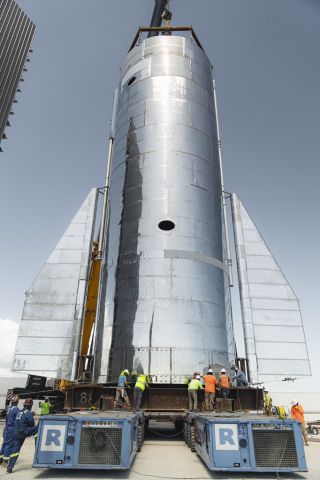 Elon Musk is doling out more and more details about SpaceX's next Starship prototype ahead of his big presentation this weekend.

On Saturday (Sept. 28), Musk will reveal the latest design of Starship and Super Heavy, the reusable spaceship and rocket that SpaceX is developing to take people to the moon, Mars and other distant destinations.

The presentation will take place at SpaceX's South Texas facilities near the village of Boca Chica, where the company is building a Starship prototype called the Mk1, or Mark 1. SpaceX aims to fly this vehicle for the first time next month, on an uncrewed test jaunt that will reach an altitude of about 12 miles (20 kilometers), Musk has said.

The billionaire entrepreneur, who founded SpaceX back in 2002, has been giving us looks at the construction of Starship Mk1 via Twitter over the past few weeks. Yesterday (Sept. 25), for example, he tweeted out two photos of the partly finished stainless-steel vehicle being lifted onto a transporter.

Musk also provided some information about the Mk1 yesterday in a series of tweets, which addressed questions posed to him by followers. For instance, he said that this prototype — the second Starship test vehicle, after the single-engine Starhopper, which was retired last month — will stand 165 feet (50 meters) tall and weigh 1,400 tons when fueled up (and 200 tons when "dry").

But that weight should come down in subsequent iterations, Musk added. "Mk1 ship is around 200 tons dry & 1400 tons wet, but aiming for 120 by Mk4 or Mk5. Total stack mass with max payload is 5000 tons," he said in one of yesterday's tweets.

In another tweet, Musk revealed the number of landing legs the Mk1 will have: "Six. Two windward, one under each fin & two leeward. Provides redundancy for landing on unimproved surfaces."

Musk has previously said that the Mk1 and the Mk2 — a similar prototype being built at SpaceX's Florida facilities — will be powered by at least three of the company's next-generation Raptor engines. And today (Sept. 26), he tweeted three photos showing what that three-engine alignment looks like.

Three Raptors on a Starship pic.twitter.com/UrRiD62EVkSeptember 26, 2019

Both the Mk1 and Mk2 will start out making suborbital flights, but the goal is to get them to orbit eventually, Musk has said.

The final, 100-passenger Starship, meanwhile, will sport six Raptors, and the Super Heavy will boast 35 of the engines — as far as we know right now, anyway. The plan might have changed; we'll have to see what Musk says on Saturday.

The final versions of Starship and Super Heavy could start flying very soon, by the way. SpaceX representatives have said that the duo's first commercial flights, which will likely loft communications satellites, may launch as early as 2021.

And Japanese billionaire Yusaku Maezawa has booked a round-the-moon trip aboard Starship, which is targeted to launch in 2023. Maezawa plans to take a handful of artists with him on the mission, which is known as "Dear Moon."