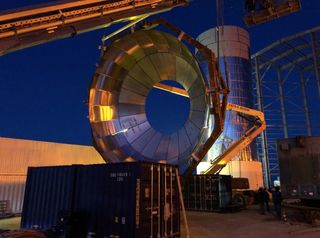 SpaceX is building two orbital Starship forerunners — a bit of intracompany competition intended to improve the design of the final spacecraft. The prototype known as Mk1 is coming together at the company's facility in Boca Chica, Texas, whereas Mk2 is being built on Florida's Space Coast.

The Mk1 and Mk2 craft are different from the stripped-down prototype known as Starhopper, which recently made its first untethered hop at Boca Chica. Starhopper has just one Raptor engine and will stay firmly within Earth's atmosphere throughout the testing phase. Mk1 and Mk2, on the other hand, will feature at least three Raptors and are designed to reach orbit, Musk has said.

Very convincing! Ok, Boca it is. We should have Starship Mk1 with 3 Raptors almost ready to fly by then.August 4, 2019

The finished, 100-passenger version of Starship will sport six Raptors. Super Heavy, the giant rocket that will launch Starship off Earth's surface, will have 35 of these next-generation engines, Musk said recently.

But we'll soon find out if those specs have changed. The billionaire entrepreneur announced via Twitter over the weekend that he'll provide a Starship design update on Aug. 24 at the Boca Chica facility. And Mk1's first flight could come quickly on the heels of that event, he added.

"Very convincing! Ok, Boca it is. We should have Starship Mk1 with 3 Raptors almost ready to fly by then," Musk tweeted on Aug. 3, responding to a follower who made the case for holding the event at Boca Chica. (Musk had previously said he'd provide the update from either Boca Chica or Cape Canaveral.)

Two days later, he gave his Twitter followers an inside look at Mk1 construction, posting four photos of the unfinished prototype.

He heaped similar praise that day on the Florida team building Mk2.

"Great progress by Starship Cape team. Started several months behind, but catching up fast. This will be a super fun race to orbit, moon & Mars!" Musk tweeted Monday.

Both Starship and Super Heavy will be reusable. SpaceX envisions the system eventually shouldering the company's entire spaceflight burden, from launching satellites to taking people to and from the moon, Mars and other distant destinations. (SpaceX plans to phase out its existing flight hardware — the Falcon 9 and Falcon Heavy rockets, and the cargo and crew versions of the Dragon capsule, Musk has said.)

The first Starship-Super Heavy mission could come as early as 2021, SpaceX representatives have said. The first flights will likely loft commercial communications satellites. But a crew-carrying mission is on the docket for 2023: Japanese billionaire Yusaku Maezawa booked a trip around the moon for himself and a handful of artists.