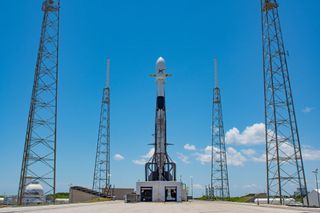 A SpaceX Falcon 9 rocket topped with 60 Starlink internet satellites on the pad at Florida's Cape Canaveral Air Force Station in May 2019.
(Image: © SpaceX via Twitter)

The satellites that SpaceX is about to launch to Earth orbit could help humanity settle the moon and Mars someday.

On Thursday (May 23), SpaceX plans to loft the first 60 spacecraft of its planned Starlink megaconstellation, which is designed to provide affordable internet service to people around the world.

But don't expect a signal right away. Six more launches with 60-satellite payloads each will be needed to activate Starlink, and six more after that are required for the network to provide "significant coverage," SpaceX founder and CEO Elon Musk has said.

There's a "fundamental goodness" inherent in improving internet access, the billionaire entrepreneur said in a call with reporters on May 15. But there should be a lot of money in the enterprise as well — perhaps up to $50 billion per year for SpaceX.

"Total internet-connectivity revenue in the world is on the order of $1 trillion [annually], and we think maybe we can access about 3% of that, or maybe 5%," Musk said.

That would be a huge boost over SpaceX's launch revenue, which tops out at around $3 billion per year, Musk added. The extra money could allow SpaceX to do what Musk has repeatedly said is the company's main goal: help humanity become a multiplanet species.

"We think this is a key steppingstone towards establishing a self-sustaining city on Mars and a base on the moon," Musk said of Starlink. "We believe we can use the revenue from Starlink to fund Starship."

Starship is the reusable, 100-passenger spaceship that SpaceX is developing to ferry people to the Red Planet and other distant destinations. That spacecraft will launch atop a giant rocket called Super Heavy, which will also be reusable, the company has said.

If development continues to go well, Starship could launch toward the Red Planet for the first time by the mid-2020s, Musk has said. (A lunar mission could come before that milestone; Japanese billionaire Yusaku Maezawa has booked a round-the-moon trip aboard Starship, with launch targeted for 2023.)

Starlink could eventually grow to truly epic proportions, perhaps up to 12,000 satellites or so (though Musk said in Wednesday's call that economic viability is feasible with a constellation numbering about 1,000 spacecraft). To put that in perspective, there are about 2,000 operational satellites in Earth orbit today.

SpaceX will likely have to overcome some competition to achieve its Starlink vision. Other companies are planning internet-satellite megaconstellations of their own, including OneWeb and Amazon.