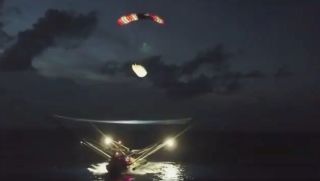 Half of a SpaceX Falcon 9 payload fairing settles into the net of the boat GO Ms. Tree on the night of Aug. 6, 2019, in this screenshot from a video posted on Twitter by SpaceX founder and CEO Elon Musk.
(Image: © Elon Musk/SpaceX via Twitter)

SpaceX will try to double its recent run of success in catching falling payload fairings.

The company will soon start employing a second net-equipped boat during orbital launches, in an attempt to snag both halves of its rockets' payload fairings before they splash down in the ocean, SpaceX founder and CEO Elon Musk confirmed via Twitter on Friday (Aug. 9).

The new boat, named GO Ms. Chief, will join forces with GO Ms. Tree, which has plucked falling fairing halves out of the sky twice in the past six weeks. (The team-up involves style as well as substance; both vessels' names are groan-inducing puns.)

"Is Go Ms. Chief the sister to Go Ms. Tree? gonna get both halves soon?" Tim Dodd, better known as the Everyday Astronaut, asked Musk via Twitter on Friday. Dodd was participating in a thread kicked off by SpaceXFleet Updates, which announced the existence of GO Ms. Chief. "Yup," Musk responded.

Payload fairings are the protective nose cones that surround satellites during launch. SpaceX fairings — the company uses identical ones for its Falcon 9 and Falcon Heavy rockets — come in two pieces and are worth about $6 million, Musk has said. So, there's a strong incentive to recover and reuse this gear.  (SpaceX already reuses its first-stage boosters, of course, landing more than 40 of them during orbital launches to date.)

Keeping fairings dry is key to this vision, because saltwater is very corrosive, Musk has said. SpaceX therefore outfits each fairing half with small steering thrusters and parachutes to give GO Ms. Tree (and now GO Ms. Chief) the best chance of success.

GO Ms. Tree had a run of near misses before breaking through with a fairing-half catch on June 25, during the third-ever launch of SpaceX's Falcon Heavy megarocket. The boat grabbed its second fairing piece just last week, during a Falcon 9 liftoff.

Looks like @SpaceX is pretty confident in their fairing recovery and now have two boats... one for each fairing! That's amazing!!!! https://t.co/8o5RgB4UXbAugust 9, 2019

Musk broke some other news via Twitter Friday as well. He announced that SpaceX aims to launch its Starhopper vehicle on its highest test flight yet this weekend — a jaunt up to an altitude of 650 feet (200 meters) or so.

Starhopper is an early test prototype of SpaceX's Starship vehicle, which the company is building to help ferry passengers to and from the moon, Mars and other distant destinations (and perform a variety of other spaceflight feats as well). If all goes well, Starship and its huge rocket, known as Super Heavy, could fly an operational mission for the first time in 2021, SpaceX representatives have said.