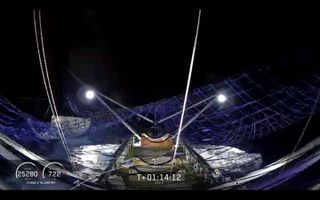 Half of a Falcon Heavy payload fairing nestles in the net of the boat Ms. Tree in the early-morning hours of June 25, 2019.
(Image: © SpaceX)

This was a first for the speedy boat, which had come close on multiple occasions but had never managed to seal the deal.

Payload fairings protect satellites during launch and are jettisoned after rockets reach space. The fairings SpaceX uses for the Heavy and the company's workhorse Falcon 9 rocket, which fall back to Earth in two pieces, cost about $6 million each, company founder and CEO Elon Musk has said.

There's thus ample motivation to recover and reuse this expensive hardware. Indeed, SpaceX equips both fairing halves with parachutes and small steering thrusters, to bring the gear down softly and under control.

And that's where Ms. Tree comes in: Snagging the fairing halves before they hit corrosive seawater makes reuse more feasible and cost effective, Musk has said.

Ms. Tree plucked one fairing half out of the sky yesterday morning, and the other half splashed down in the Atlantic, according to SpaceX launch commentator and principal integration engineer John Insprucker.

"So, another first-time accomplishment for the SpaceX team, especially out there in the middle of the Atlantic," Insprucker said during the mission webcast.

For example, the Heavy's two side boosters already had one flight under their belt before yesterday's mission, which took off from NASA's Kennedy Space Center (KSC) in Florida. And the two first stages aced their touchdowns again yesterday, coming down safely at Landing Zone-1, a SpaceX facility at Cape Canaveral Air Force Station next door to KSC.

The central booster tried to land on a SpaceX drone ship in the Atlantic, hundreds of miles off the Florida coast, but came up just short.

Yesterday's launch, the third-ever flight for the Falcon Heavy, delivered 24 satellites to a variety of orbits over the course of about 3.5 hours. It was the most challenging SpaceX mission to date and perhaps the most complex rocket launch in history, Musk said via Twitter.