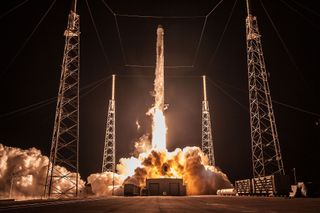 SpaceX has pushed back the launch of its next robotic resupply mission to the International Space Station (ISS) by four days, to April 30.

"SpaceX will take advantage of the additional time to perform a static fire test and pre-flight checkouts," NASA officials wrote in an update. "Falcon 9 and Dragon are on track to be flight-ready for an earlier launch attempt; however, April 30 is the most viable date for both NASA and SpaceX due to station and orbital mechanics constraints."

The upcoming mission will be the 17th flown by SpaceX under its Commercial Resupply Services contract with NASA. SpaceX also holds a commercial-crew deal with the space agency, the terms of which the company will fulfill using the Falcon 9 and a crewed variant of Dragon.

Crew Dragon flew its first test mission to the ISS last month. The successful six-day flight, known as Demo-1, was uncrewed. But Demo-2 will carry two NASA astronauts, and that mission could lift off as early as this summer. Operational contracted missions to the orbiting lab will follow, perhaps by the end of the year.

Boeing also holds a NASA commercial-crew contract. The aerospace giant is targeting August for the debut mission of its CST-100 Starliner capsule to the ISS. That first flight will be uncrewed.

NASA will host a news conference Monday (April 22) at 11 a.m. EDT (1500 GMT) to discuss the science payloads that Dragon will carry to the ISS on the upcoming cargo mission. You can watch it live here at Space.com, courtesy of NASA TV.