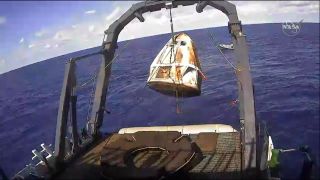 A recovery ship hauls SpaceX's first Crew Dragon capsule out of the Atlantic Ocean after the spacecraft's splashdown on March 8, 2019.
(Image: © NASA TV)

SpaceX's Crew Dragon capsule aced its first mission to the International Space Station (ISS), wrapping up the six-day flight this morning (March 8) with a splashdown in the Atlantic Ocean.

Aside from an instrument-laden dummy named Ripley, Crew Dragon didn't carry any passengers on the flight, which is known as Demo-1. But the success of the shakeout cruise suggests that this huge milestone isn't far off.

"It is quite a privilege to be here for these historic days," Canadian Space Agency astronaut David Saint-Jacques said Wednesday (March 6) from the station in a video conversation about Demo-1 with U.S. Vice President Mike Pence and NASA Administrator Jim Bridenstine.

"This is really the opening of a new era," added Saint-Jacques, who was joined in the orbit-to-ground call by NASA astronaut Anne McClain.

To appreciate the new era, we first must take brief stock of the old one.

American astronauts haven't launched to orbit aboard a homegrown spacecraft since July 2011, when the space shuttle Atlantis lifted off on the final mission of the shuttle program.

Ever since then, the United States — and every other nation that sends people to and from the ISS — has been dependent on Russian Soyuz spacecraft, which launch atop rockets of the same name. The Soyuz sports three seats, each of which currently sells for about $80 million.

This reliance on Russia was always supposed to be temporary, a sort of stopgap until private American vehicles became available. In 2014, NASA inked commercial-crew deals with two American companies: SpaceX got $2.6 billion to develop Crew Dragon, and Boeing received $4.2 billion to work on its CST-100 Starliner capsule.

At the time, NASA officials said they hoped that one or both of these capsules would be operational by the end of 2017. That timeline has been pushed back, of course. But, with Demo-1 in the books, the goal is now in sight for SpaceX.

Indeed, the company could get there this year. A launch-abort test, which will demonstrate Crew Dragon's emergency-escape system, is planned for the June timeframe. If that goes well, a crewed demonstration flight to the ISS called Demo-2 could occur as early as July. Contracted missions for NASA, each of which will carry four astronauts, will follow sometime thereafter.

Boeing's target schedule is similar. Starliner's uncrewed test flight to the ISS, abort test and crewed ISS test flight could occur in April, May and August, respectively, if everything goes well.

The private spacecraft, and other recent innovations such as routinely reflown rockets, will help lower the cost of access to space and thereby enable lots more activity in low-Earth orbit (LEO) and beyond, NASA Administrator Jim Bridenstine said today in a webcast address just after Crew Dragon's splashdown.

The result, he predicted, will be the emergence of a "robust commercial marketplace" in which NASA is just one of many customers for vehicles such as Crew Dragon. Indeed, SpaceX founder and CEO Elon Musk recently said that he envisions flying space tourists on the capsule in the not-too-distant future.

With burgeoning LEO operations in private hands, NASA will be able to devote more resources to its chief human-spaceflight goals — putting people back on the moon and then getting astronauts to Mars, Bridenstine said.

Demo-1 is one piece "in that really grand vision," he said. "And this is no small piece. This is an amazing achievement in the history of the United States of America."

Eric Stallmer, president of the Commercial Spaceflight Federation, voiced similar sentiments, saying that the Demo-1 success will likely have reverberating effects throughout the spaceflight industry.

"What it shows is the tremendous opportunity that's ahead of us," Stallmer told Space.com. "And it's not in the far-distant future; it's months away."

Not everyone views Demo-1 as such a transformative event, however.

But Crew Dragon isn't doing anything particularly new, he said, noting that Apollo astronauts made parachute-aided ocean splashdowns nearly 50 years ago — and that was after trips to the moon. And Logsdon doesn't see Crew Dragon as a truly commercial vehicle, because it was developed, and flies, with NASA funding.

"Because of Elon and SpaceX, there's an aura of innovation to this," he told Space.com. "And I think the excitement that that creates is good for everybody. It's all good, but it's not the paradigm shift of a new way of doing business."