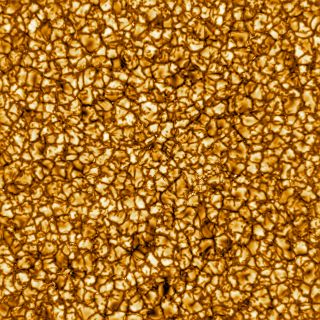 It's an image of the sun like nothing anyone has ever seen: glowing, golden kernels divided by dark latticework, like a stained-glass window forged by astrophysics.

But that image, the "first light" data taken by a massive new solar telescope, is only a preview of how the observatory will change the way we see the star that shapes every day of our lives. That "caramel corn" image was stunning to many people, even solar scientists.

The new image was "crystal clear, sharp," said Valentin Martínez Pillet, director of the National Solar Observatory. That institution operates the Daniel K. Inouye Solar Telescope, which was funded by the National Science Foundation and which captured the new data. Martínez Pillet said that, in decades of viewing solar images, he's never seen anything like the new one. "That's as good as it gets," he told Space.com.

Related: Our sun will never look the same again thanks to two solar probes and one giant telescope

"It was always the case where you would look at the solar image and you knew, yeah, we need to do better," Martínez Pillet said. Not anymore.

But although he was awed just like everyone else, he saw the image a little differently than others may have. Many people fixated on the large, pale "kernels," each about the size of Texas. But for Martínez Pillet, the most compelling features in the first-light image were the crackles of granulated brightness nestled between the kernels.

Scientists have never been able to see those granules clearly before, yet they believe the bright dots are key to understanding solar phenomena and how we experience those events way out here in Earth's neighborhood. "As scientists, our eyes went to the brightest tiny, little features," Martínez Pillet said. "The reason for that is we know these are the roots of the solar magnetic field."

The sun's magnetic field dictates precisely how the plasma, or soup of charged particles that make up our star, roils in the sun and blasts out across the solar system. The blasts take different forms, from the slow, steady flow called the solar wind to the massive outbursts called coronal mass ejections. But around Earth, the plasma can cause a host of phenomena called space weather, which can harm astronauts, damage communications and navigation satellites, and cause other disruptions. Scientists want to make better predictions of these events, and to do so, they need to understand how the sun and its magnetic field really work.

Of course, the crackly "first light" image is only one step toward reaching that goal. And the instrument that produced the image is just one of three instruments the solar telescope will use once the facility, located on the Hawaiian island of Maui, is fully operational.

The other two instruments, which should be installed by this summer, will tell scientists much more about the dynamics of the magnetic field than any image could, thanks to two other key techniques. "Everything we do in astronomy is either imaging, spectroscopy or polarimetry," Martínez Pillet said. "We solar astronomers need to do all of them."

Spectroscopy is a standard astronomical technique that analyzes the specific wavelengths of light that a source emits — a technique that can reveal the locations of different elements. Spectroscopy can also tell scientists where plasma is moving — higher or lower in the sun — by using Doppler shifts, the phenomenon that tweaks all light depending on whether its source is moving toward or away from the instrument.

Polarimetry is a less common astronomical technique, because for polarimetry to be successful, scientists need to be able to capture a lot of photons, or light, which is tricky for more distant stars. But the sun is, of course, much closer than any other star, and the Inouye Solar Telescope's polarimeter will be the largest such instrument ever built, making polarimetry a powerful approach for studying the sun's magnetic field, Martínez Pillet said.

In general, Earth's magnetic field is reasonably steady over time and space. North is north is north. The sun's magnetic field, by contrast, is dynamic. "The sun has billions of compasses and magnets moving around, and we need to know the directions of these compasses," Martínez Pillet said. That's what the tiny, bright spots in the new image represent: individual, dynamic magnetic fields.

With that knowledge, scientists hope to begin tracing space weather phenomena back to their very beginnings on the sun. "We are magnetically connected to the sun," Martínez Pillet said. "There are so many physical processes that we don't know what their origins really are on the sun."

Scientists hope the new solar telescope will give them enough detailed data to begin evaluating the potential origins of different phenomena. "We have theories," Martínez Pillet said. "We need to start saying, 'OK, these are the good theories; these are the ones that are not working.'"

The Inouye Solar Telescope won't be alone in that effort. In particular, it has two crucial partners that are taking instruments directly to the sun: NASA's Parker Solar Probe and the Solar Orbiter, which NASA and the European Space Agency jointly operate. The Parker Solar Probe is flying closer to the surface of the sun than any spacecraft has before, and the Solar Orbiter, which launched last month, will give scientists their first look at the sun's poles.

The Inouye Solar Telescope has company here on Earth as well, Martínez Pillet said. In particular, he pointed to the National Solar Observatory's network of six smaller solar telescopes stationed around the world. Those telescopes, working two at a time as Earth's spin carries each in view of our star, offer a constant look at the whole Earth-facing side of the sun.

With these four projects, scientists hope to understand space weather well enough to predict it reliably. "We're going to need a decade; it's going to be a long process," Martínez Pillet said. "It's exciting times to be a solar astronomer."