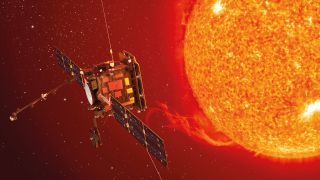 Solar Orbiter is a planned European Space Agency (ESA) mission that will study the surface of the sun. It is expected to launch in October 2018 from Cape Canaveral, Florida. NASA is providing a launch vehicle, as well as an instrument and a sensor.

After launch, the spacecraft will do several gravity-assist maneuvers at Earth and Venus to save fuel as controllers move it into its operational orbit. Once these maneuvers are complete, the spacecraft will have a 168-day orbital period and will get as close to the sun as 0.28 astronomical units, much closer than Mercury. (For comparison, one astronomical unit is the Earth-sun distance.)

"At nearly one-quarter of Earth's distance from the sun, Solar Orbiter will be exposed to sunlight 13 times more intense than what we feel on Earth. The spacecraft must also endure powerful bursts of atomic particles from explosions in the solar atmosphere," ESA said in a statement.

"To withstand the harsh environment and extreme temperatures, Solar Orbiter must be well equipped. It will exploit new technologies being developed by ESA for the mission BepiColombo to Mercury, the planet closest to the sun. This includes high-temperature solar arrays and a high-temperature high-gain antenna."

Solar Orbiter is expected to last seven years, orbiting with an orbital inclination of about 25 degrees relative to the sun's equator. If the mission is extended, more gravity assists at Venus will be used to change the spacecraft's inclination to 34 degrees. This will allow the spacecraft to pursue different science goals in the extended mission, ESA said.

The spacecraft's high inclination will allow close-up views of the sun's pole for the first time. Also, ESA said, the spacecraft will have a nearly identical rotation period as the sun for several days, allowing scientists to — for the first time — see solar storms developing from the same viewpoint.

The origins of Solar Orbiter can be traced at least as far back as 1998, when European scientists created a report called "A Crossroads for European Solar and Heliospheric Physics." According to ESA, two mission ideas from the report were combined into a single mission, which is now called Solar Orbiter.

One mission concept called for imaging the sun in visible and ultraviolet wavelengths and taking pictures of the sun away from the equator. The other suggested getting close to the sun — at 0.15 AU, or half the distance of Mercury — to get images of the sun in high resolution. Solar Orbiter, which was first envisioned as a single mission in 1999, had some design compromises to meet the goals of the two missions, including having a further distance from the sun (0.30 AU).

In October 2000, ESA's science program committee selected Solar Orbiter for launch between 2008 and 2013. As is common with launch dates, however, the timeline was pushed back; in 2006, an ESA release said that Solar Orbiter's launch would take place no earlier than 2017 due to financial considerations.

By 2007, ESA and NASA had partnered under a program called Heliophysical Explorers, and the missions of ESA's Solar Orbiter and NASA's Solar Sentinels were designed to complement each other.

ESA's current planning cycle for missions is called Cosmic Vision 2015-2025. In 2007, ESA put out the first call for mission proposals, which resulted in 50 proposals competing for either a medium-class (M-class) or large-class (L-class) launch opportunity in 2017 or 2018, respectively.

In 2009, ESA announced that it would move forward on its missions independently of NASA, citing concerns about NASA's funding and that NASA's own long-term vision (the Decadal Survey) did not prioritize the joint European missions. It made several changes to its M-class and L-class missions, including changing the 2017 and 2018 launch dates to M-class missions. Solar Orbiter was also reclassified as an M-class mission candidate for one of these two launch opportunities.

Then in February 2010, ESA further winnowed down the M-class candidates to Euclid, PLATO, and Solar Orbiter. Following a competitive definition phase, Solar Orbiter and PLATO were selected in October 2011 for the first two M-class mission launches, in 2017 and 2020 respectively.

Astrium UK was selected as the prime contractor in April 2012. Three years later, the launch — targeted for July 2017 — was pushed back to October 2018. "The decision to postpone the launch was taken in order to ensure that all of the spacecraft's scientific goals will be achieved, with all the system's components adequately tested prior to sending the spacecraft to the launch site," said Philippe Kletzkine, ESA's project manager for Solar Orbiter, in a statement at the time.

The main objective of Solar Orbiter is to figure out how the sun creates and controls the heliosphere, or the solar atmosphere, according to ESA.

Because the sun influences the Earth's weather, understanding how the sun works can help predict phenomena caused by charged particles from the sun, such as auroras and satellite breakdowns. At worst, these events can damage satellites or even power lines; the worst recent example was the Carrington event, a geomagnetic storm in 1859 that reportedly set telegraph lines on fire.

The mission's work is broken down into four top-level scientific questions, which concern:

Solar Orbiter will be so close to the sun that it will produce images showing details as small as 111 miles (180 kilometers), a tiny fraction of the sun's visible disk of 860,000 miles (1.4 million kilometers). "Not only scientists, but also the general public will be enchanted with the frenzied activity on the Sun, which looks so calm to the naked eye," ESA stated.

Instruments on the spacecraft include:

Given the sun's massive influence on Earth's client, dozens of missions to study it have been launched over the past few decades. Some of the more recent missions are highlighted here.

Ulysses was a joint mission between NASA and ESA that launched in 1990 and remained operational until June 2009. Its goal was to perform measurements of the region of space above the sun's poles, for the first time, as well as to study the sun and the solar wind. The spacecraft, like Solar Orbiter, had a higher orbital inclination that was modified by a gravity assist maneuver around Jupiter. It also performed studies of several comets.

The long-running NASA/ESA Solar and Heliospheric Observatory (SOHO) was launched in 1995 to study the sun's entire environment, from its interior to its corona. Due to its vantage point and instruments, the spacecraft coincidentally turned out to be an excellent observer of sun-grazing comets; it has found more than 2,000 to date.

Hinode is a spacecraft launched in 2006, which is a collaboration among NASA, ESA and the Japan Aerospace Exploration Agency (JAXA). It studies how magnetic energy is generated in the sun's photosphere (the "surface" of the sun) and transported through the atmosphere to the corona, and beyond.

NASA's Solar Terrestrial Relations Observatory (STEREO) launched in October 2006. Originally it had two spacecraft, dubbed STEREO-Ahead (STEREO-A) and STEREO-Behind (STEREO-B). The goal was to do stereographic imaging of the sun and to learn more about the nature of coronal mass ejections. Communications were lost with STEREO-B in 2014 during a routine reset of the spacecraft. Controllers briefly made contact in 2016 with STEREO-B, but lost it again.

NASA's Solar Dynamics Observatory launched in 2011 to look at the causes of solar variability, and the resulting effects on Earth. It focuses on the solar interior, the sun's magnetic field, the corona and the flow of charged particles.

NASA's Solar Probe Plus is expected to launch in 2018, and will get as close as four million miles (0.04 astronomical units) from the sun. Its goal is to examine energy flow that leaves the sun and affects the solar corona and the solar wind.