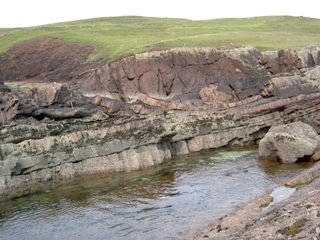 Laminar beds of sandstone have preserved the crater under the Minch Basin.
(Image: © University of Oxford)

The site of the largest meteorite to hit the British Isles has finally been discovered in a remote part off the Scottish coast, 11 years after scientists first identified evidence of the massive collision.

A team of researchers from the Department of Earth Sciences at the University of Oxford located the crater around 12 miles (20 kilometers) west of the coast of Scotland, where the feature lay buried underneath water and rocks that helped preserve it all those years. The scientists published their findings today (June 9) in the Journal of the Geological Society.

"The material excavated during a giant meteorite impact is rarely preserved on Earth, because it is rapidly eroded," Ken Amor, study lead author and researcher at the University of Oxford's Department of Earth Science, said in a statement. "So this is a really exciting discovery."

The 0.6-mile-wide (1 km) meteorite is believed to have hit our planet 1.2 billion years ago, when Scotland was a semi-arid environment located near the equator, Oxford officials said in the statement. But there would likely have been no observers of the impact, since most life on Earth was still confined to the oceans at the time while the collision took place on land.

"It would have been quite a spectacle when this large meteorite struck a barren landscape, spreading dust and rock debris over a wide area," said Amor.

Evidence of the collision was discovered in 2008, when scientists found large traces of iridium, a chemical found in high concentrations in meteorites, in a layer of rocks near the northern town of Ullapool.

The rocks were initially believed to have resulted from a volcanic eruption, but further analysis of their composition led scientists to their terrestrial origins.

"We're very lucky to have [the rocks] available for study, as they can tell us much about how planetary surfaces, including Mars, become modified by large meteorite strikes," John Parnell, a professor of geology at the University of Aberdeen in Scotland and co-author of the 2008 paper, said in a statement at the time.

Using data gathered from the field, the team of scientists determined the approximate direction from which the meteorite came and thereby located the crater.