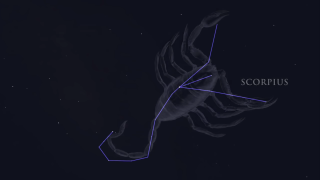 The constellation of Scorpius the Scorpion is visible above the southern horizon this summer.
(Image: © NASA)

Next to Orion the Hunter, probably the most beautiful constellation in our sky is Scorpius the Scorpion.

Unfortunately, Scorpius is a star pattern that appears to slink across the southern sky, rather low and close to the horizon. With this in mind, it is well worth seeking out a good clear southern horizon as darkness falls this week to appreciate this majestic celestial arachnid.

And this summer, the brilliant planet Jupiter stands just above the Scorpion adding to the scene.

Typically, most scorpions hide under logs, rocks, piles of rubble, heavy vegetation and clutter. Most prefer deserts and semiarid regions and try to remain out of sight during the day, usually waiting until dark to emerge. What a pity that such an arresting star pattern was made to represent such a lowly, creepy-crawly thing that has few friends.

Just as Orion is the most striking winter stellar pattern, such a distinction can be claimed for Scorpius for the summer season. Indeed, if Orion could be described as the "California of the sky," then it is only right to call Scorpius, the "Texas of the heavens." Large, famous and rich, it is the most impressive and most easily learned of all the deep-southern constellations seen from the United States.

Even though it lacks anything as catchy as Orion's belt, the Scorpion forms a rather striking fishhook shape whose main stars are all third magnitude and brighter; this is why they can be seen even before evening twilight ends. Where else in the sky can we find as many as 15 stars of third magnitude and brighter that form a more conspicuous, distinctive constellation figure than the Scorpion? Two-thirds of these look white or even bluish white, for they are hot, highly luminous stars moving through space together.

The whole figure of the scorpion is a magnificent sight and is best appreciated now in a dark sky without any interference from bright moonlight. It really looks like a huge scorpion, with its long stinging tail curled over its back. The upper stars of this star pattern form its body; its tail slants toward the horizon, then curves to the left and upward, a fine stream of stars ending in a pair of stars, Shaula and Lesath, marking the Scorpion's stinger. Astronomy popularizer Hans A. Rey (1898-1977) dubbed these two stars the "Cat's Eyes," noting, "You will find the name quite fitting."

But I think it should also be emphasized to those newcomers of astronomy that the currently accepted name of this constellation is Scorpius, and not Scorpio. Principally, astrologers (and some older astronomy books) use the latter for labeling the zodiacal sign of that name.

One star clearly outshines all the others, with a fiery tinge that accentuates the Scorpion's malevolent appearance: the first-magnitude Antares, 15th brightest on the list of the 21 brightest stars, it displays an obvious ruddy hue. To the ancients, its distinctive red color suggested the planet Mars and the name Antares means "The Rival of Ares," Ares being the Greek name for the god of war. But in the sky, Mars shines with more of a pumpkin or orange hue, so in terms of resembling the color of blood, Antares would certainly win out over Mars, hence the reason for it being christened as Mars' rival, regardless of whether Mars appeared brighter or not!

In the time of Confucius, the Chinese called this star Huo Shing, "The Fire Star." Some 5 millennia ago, the Persians thought of Antares as one of the Royal Stars, a guardian of heaven. The Romans referred to it as Cor Scorpionis, meaning the "Heart of the Scorpion," a title that the French also use — Le Coeur de Scorpion.

Antares is a red supergiant star, 550 light-years away, 10,000 times more luminous than our sun and, on average, about 680 times its size. We cannot provide an exact figure on how wide Antares is, because it appears to expand and contract in size at irregular intervals. To get an idea of just how large Antares is, imagine shrinking the sun down to the size of a baseball. On that scale, using its average size as a base, Antares would be a globe measuring 130 feet in diameter!

A globe, however, suggests something that is solid and there is apparently nothing solid about Antares; with a mass only 12 times that of the sun, it is not very dense. Its insides might be more like a very hot vacuum.

Antares is actually a double star. Along with the red supergiant (Antares A), there is a much smaller fifth magnitude blue-green companion (Antares B). "B" is normally difficult to perceive because of its close proximity to "A," but on those occasions when a waning moon occults (hides) Antares, as it is about to emerge from behind the dark portion of the moon's disk, "B" is seen first, shining by itself for several seconds, before "A" suddenly pops into view, hiding its fainter partner.

In ancient times Scorpius' importance in mythology and astrology was great, particularly while it was joined with Libra to form a super-constellation, covering two signs of the zodiac. Indeed, ancient star atlases depicting Scorpius included the stars of Libra the Scales to represent the Scorpion's claws.

This history is preserved in the names of these stars. Zubeneschamali is from the old Arabic meaning "The Northern Claw," and Zubenelgenubi means "The Southern Claw." Scorpions have two large claws in front, but this one seems to have had his claws clipped. It appears that the Romans were the first to decide that there should be 12 constellations in the zodiac, instead of 11, so they made the two claws of Scorpius into the arms of Libra. Today, based on international agreement, there is a strict division of these two constellations.

There were also mythological reasons for the Scorpion's location among the stars. One legend has it representing the creature that stung Orion the Hunter to death. To honor Orion, the Scorpion was placed opposite him in the sky, giving rise to the legend that these constellations can never appear in the sky together. While this is true for northern latitudes, for regions south of the equator both constellations can be glimpsed simultaneously on opposite sides of the sky.

Sweep up with binoculars from the Scorpion's tail, through the Summer Triangle, and down to the constellations Cassiopeia and Perseus in the northeast. You'll find concentrations of stars, clusters, large apparent gaps such as the Great Rift in Cygnus, and more stars than you thought existed. There are abundant deep-sky objects of all kinds.

Within the boundaries of Scorpius, double and triple stars abound and there are two globular and two open star clusters, amid the rich star clouds of the Milky Way. Anyone familiar with the constellations and who has taken a trip to far-southerly latitudes, where the Scorpion climbs nearly overhead, may recall that the Great Rift runs even farther to the south. The Rift, however, is not a region devoid of stars but, in fact, is tremendous band of dust and other obscuring matter that lies between Earth and the center of our Milky Way galaxy.