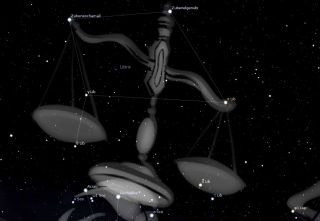 The stars that make up the constellation Libra were once considered part of Scorpius.
(Image: © Stellarium)

Libra is Latin for weighing scales, making it the only constellation of the Zodiac representing an inanimate object. At 538 square degrees, Libra ranks 29th overall in terms of size. It doesn't have any first magnitude stars, making it relatively faint but not impossible to view with the naked eye.

Libra is in the Southern Hemisphere, located between Scorpius to the east and Virgo to the west. In addition to Scorpius and Virgo, Libra borders Serpens Caput, Hydra, Centaurus, Lupus and Ophiuchus.

At one time Libra was considered part of Scorpius — the scales looked like claws hung upside down — but then Roman astronomers redrew the skyline and moved the claws of the scorpion to Libra.

The constellation's brightest stars — Alpha Librae (α Lib), Beta Librae (β Lib) and Gamma Librae (γ Lib) — make up the upper part of the scale that links the two balances, which are hanging off the triangle at an angle.

A blue dwarf with a magnitude of 2.7, Beta Librae is the constellation's brightest star and is 160 light-years distant. It is the only star to appear green to the naked eye. The star is also known as Lanx Australis ("the southern scale") and Zubeneschamali ("the northern claw").

Alpha Librae is the second brightest star in the constellation. This binary star is about 77 light-years away.

Gamma Librae is an orange giant of magnitude 3.9, 152 light-years from Earth.

Libra contains the planetary system Gliese 581, which has several planets. Some studies have suggested Gliese 581d and Gliese 581 g are habitable — in a zone near their star where water would exist on the surface — but their existence is not fully proven. Gliese 581c was discovered in 2007; at first, scientists suggested there could be liquid water on its surface, but follow-up studies in 2007 and 2011 by different teams suggested the planet is so close to its star that it may have a more Venus-like environment (runaway greenhouse effect, hot surface).

Also within Libra is the bright star cluster NGC 5897, which is 40,000 light-years from Earth with an integrated magnitude of 9.

The association with scales and balance began with the ancient Babylonians, with the scales representing the balance between the seasons as well as day and night. The ancient Greeks viewed Libra as the claws of Scorpius reaching out.

To the Romans, Libra represented the scales of justice being held by the goddess Virgo or Astraea.

In astrology, which is not a science, Libra is the seventh sign in the Zodiac and represents those born between Sept. 23 and Oct. 22.