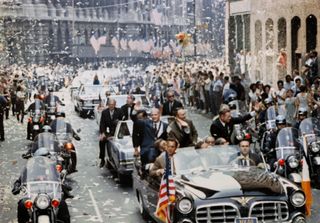 The New York City ticker-tape parade that celebrated the lunar landing after the astronauts returned in 1969.
(Image: © NASA)

Update July 20: The Times Square event has been moved inside due to weather concerns.

NEW YORK — This weekend, New York City will get a little bit closer to the moon as the city celebrates the 50th anniversary of the lunar landing.

This weekend, from Times Square to the city's renowned institutions and museums, New York City will be home to parties, special exhibitions, music and even comedy shows that will celebrate the out-of-this-world anniversary.

Whether you have a family with young children or are looking for a good time with friends, there is something for everyone looking to commemorate Apollo.

Comedy and Space on The Intrepid

Tomorrow night (July 20) at 7 p.m. EDT, as part of the "Intrepid Presents" series, the Intrepid Sea, Air & Space Museum will be hosting "To the Moon," a night of comedy with the Upright Citizens Brigade (UCB) and former NASA astronaut Mike Massimino, who also serves as Senior Space Advisor to the Intrepid.

At "To the Moon," Massimino and the UCB gang will discuss the history and science of Apollo, exploring how the lunar landing was accomplished. The night will even include an Apollo 11-inspired improv set.

In addition to Massimino, the cast will feature Noah Petro, the project scientist for NASA's Lunar Reconnaissance Orbiter mission, and UCB's Lauren Adams, who most recently played a "mole-woman" in the Netflix series "Unbreakable Kimmy Schmidt."

This is a ticketed event for adults 21+, where wine and beer will be available for purchase; tickets can be found at www.intrepidmuseum.org.

For those traveling with children, earlier in the day the Intrepid will be showing the Giant Leaps Planetarium Show. This presentation takes audiences through the incredible process of landing humans on the moon. Through Project Mercury, the Gemini Program and the incredible Apollo missions that preceded the first moon landing, this planetarium show will take visitors all the way to the moon landing itself, showing them what the incredible journey was really like.

Saturday night (July 20) in Zankel Hall at Carnegie Hall, a 30-piece orchestra and Broadway artists will perform the multimedia Apollo extravaganza "We Choose to Go to the Moon," created and narrated by historian John Monsky. The event will include performances of music popular at the time of the Apollo 11 launch (1969) in addition to recently discovered NASA footage and the lunar landing photos that we all know and love.

This will be the second performance of "We Choose to Go to the Moon," which premiered earlier this week on Tuesday (July 16), the 50th anniversary of the Apollo 11 launch. "John Monsky is a great storyteller with a special ability to combine music, visual images and film in a way that is magical and very emotional," Carnegie Hall Executive and Artistic Director Clive Gillinson said in a statement about the event.

The performance will star Broadway singers Shonica Gooden (Cats, Hamilton), Adam Kantor (The Band's Visit, Fiddler on the Roof), Elena Shaddow (The Visit, La Cage aux Folles) and David St. Louis (Side Show, Harry Potter and the Cursed Child). The event will be conducted by Kimberly Grigsby and include tunes like David Bowie's "Space Oddity" and hits by Elton John.

Tickets for this event can be found at www.carnegiehall.org.

Lunar Photography at the Met

Open until Sept. 3, 2019, the Metropolitan Museum of Art's exhibit, "Apollo's Muse: The Moon in the Age of Photography," celebrates the 50th anniversary of the lunar landing through stunning, visceral imagery.

The exhibit features images of the moon from the earliest origins of photography to the present. The New York Times called the exhibition a "Beautifully installed revelation … a trailblazing marriage of science and art … the images collected here read like a love letter from all [the moon's] ardent suitors."

In addition to photographs, the exhibit displays a selection of drawings, prints, paintings, films, astronomical tech and cameras that were actually used by some of the Apollo astronauts.

This exhibition is accessible with general museum admission.

Tranquility Base in Times Square

On Saturday (July 20), starting at noon EDT and lasting throughout the entire day, the Sea of Tranquility, where the Apollo 11 astronauts landed in the Eagle, will be recreated in the Marriott Marquis hotel in Times Square. (The main festivities were moved inside as the city swelters under a heat wave.) The event, hosted by the Aldrin Family Foundation, will be free and family friendly.

First, visitors will be able to "walk on the moon," stepping onto a larger-than-life mosaic of Neil Armstrong's famous first footprint on the lunar surface. The Aldrin Family's  Giant Moon Map and Giant Mars Map will also be on display, along with robotic and educational activities for visitors to explore.

Lastly, historical footage from the Apollo Program will be displayed on digital screens throughout Times Square, courtesy of the Discovery Channel.

Another family friendly event, SpaceFest at the American Museum of Natural History, will take place beginning at 10 a.m. The day will feature storytime activities, a digital recreation of the Apollo 11 flight and lunar landing, a talk from astrophysicist Jackie Faherty, dynamic imagery of the sun's surface, astronomy education activities in the GeoDome, and the virtual reality experience "To the Moon," for which guests can make advanced reservations.

Some activities at SpaceFest are already sold out, but most do not require additional ticketing and will be accessible to the public during museum hours.