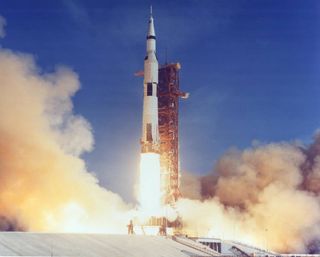 By 6:45 a.m. this day in 1969, the astronauts had eaten their steak-and-egg breakfasts, suited up, and had strapped themselves into the spacecraft. The weight of the moment hung thick in the air and the world watched as the crew prepared to make humanity's inaugural flight to the lunar surface.

At 9:32 a.m., NASA's Saturn V rocket ignited and, with 7.6 million lbs. (34.5 million newtons) of thrust, lifted off from launch pad 39A. Perfect weather met the Apollo 11 launch and spectators flocked to Kennedy Space Center and the surrounding area in Florida to catch a glimpse of the 363-foot (111-meter) tall rocket blasting off from Earth.

Two minutes and 42 seconds after launch, the rocket dropped its first stage, which fell into the Atlantic Ocean. After dropping the interstage skirt and the launch escape tower, the rocket dropped its second stage. Just ten seconds later, the third stage engine ignited and, just 11 minutes and 39 seconds after launch, the spacecraft reached an elliptical orbit around Earth, traveling at 17,432 mph (28,000 kph).

The spacecraft carried the Apollo 11 crew, along with fuel tanks, fuel cells, tanks of oxygen and hydrogen, supplies and food for the crew, cameras, the Early Apollo Scientific Experiment package, additional scientific instruments and equipment, and tools for collecting samples on the lunar surface.

As the astronauts in the command module orbited the Earth, the lunar module, known affectionately as the Eagle, was nestled safely underneath them. Just a few days after launching from Florida, Armstrong and Aldrin would land the Eagle at the Sea of Tranquility on the moon and step out onto the surface of our rocky satellite.

Cold War tensions between the U.S. and the then-Soviet Union sparked the space race. But Apollo 11 had a much greater impact than just the political victory of "getting there first." The mission's successful launch and landing remain cultural touchstones all around the world.

This week, institutions across the country and beyond are celebrating Apollo 11. From parties to educational events and so much more, there are dozens of Apollo events that will be celebrating the incredible launch, landing, and return of the Apollo 11 astronauts and spacecraft.