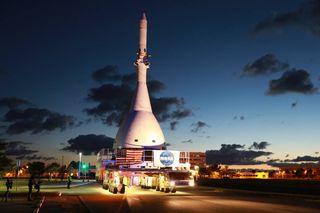 A critical component of NASA's next crew-carrying spacecraft will be put to the test early next week.

On Tuesday morning (July 2), the agency plans to prove out the Orion capsule's launch-abort system, which is designed to get astronauts away from their rocket in the event of an emergency during launch.

The brief, uncrewed flight test will involve a 22,000-lb. (10,000 kilograms) test version of Orion and a rocket built by aerospace company Northrop Grumman Corp. Liftoff will occur from Cape Canaveral Air Force Station in Florida during a 4-hour window that opens at 7 a.m. EDT (1100 GMT). You can watch it here at Space.com when the time comes courtesy of NASA, or directly via the space agency.

"During the 3-minute test, the spacecraft, with a fully functional launch abort system, will climb to an altitude of about 6 miles [10 kilometers], traveling at more than 1,000 miles per hour [1,600 km/h]," NASA officials wrote in a description of the test, which is known as Ascent-Abort 2. "At that point, the system’s powerful abort motor will fire, pulling Orion away from the booster."

Tuesday's test is important because NASA is expecting big things from Orion: The capsule will help agency astronauts get to the moon, Mars and other deep-space destinations.

Operational Orion missions will launch atop a huge rocket called the Space Launch System (SLS), which is still in development. The first SLS-Orion mission, an uncrewed test flight around the moon called Artemis 1, is scheduled to lift off next year.

Artemis is the name of NASA's ambitious crewed lunar-exploration program, which aims to put two astronauts down near the moon's south pole by 2024, and establish a sustainable presence on and around Earth's nearest neighbor in subsequent years.

NASA is targeting 2022 for the first crewed flight of SLS and Orion, a lunar flyby mission called Artemis 2.

Orion already has one space mission under its belt. In December 2014, the capsule circled Earth twice and came back down safely during an uncrewed mission called Exploration Flight Test-1. EFT-1 employed a United Launch Alliance Delta IV Heavy rocket.

NASA does not plan to use Orion to ferry astronauts to and from the International Space Station. Russian Soyuz spacecraft have provided that taxi service since the 2011 retirement of the space shuttle fleet, but NASA wants private vehicles built by SpaceX and Boeing to take over in the next year or so.