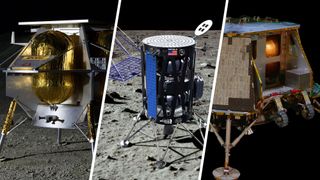 Artists' depictions of lunar lander designs from commercial companies Astrobotic, Intuitive Machines and Orbit Beyond. NASA selected the trio of companies to ferry their first science and technology payloads to the moon's surface as part of the Artemis program, the agency's plan to land humans on the moon in 2024.
(Image: © Astrobotic; Intuitive Machines; Orbit Beyond)

NASA will unveil the newest companies to vie to build commercial landers for trips to the moon today (Nov. 18) and you can follow the announcement live online.

At 4:30 p.m. EST (2030 GMT), NASA will announce them newest U.S. companies to join the agency's Commercial Lunar Payload Services project, or CLPS, for private moon landers. The new companies will join a select pool of American firms vying for NASA contracts to land experiments on the moon as part of the agency's Artemis program, which aims to return astronauts to the moon by 2024.

NASA will webcast its announcement in a teleconference, which you can follow live on Space.com here, courtesy of NASA. You can also follow the teleconference live on NASA's website.

Related: 21 Most Marvelous Moon Missions of All Time

Steve Clarke, the deputy associate administrator for exploration in NASA's science directorate, will speak during today's announcement. He'll be joined by CLPS project manager Chris Culbert of the Johnson Space Center and representatives from the newly selected companies.

Today's announcement follows NASA's selection of three companies — Astrobotic, Intuitive Machines and Orbit Beyond — to build commercial robotic moon landers for future missions. Since then, Orbit Beyond stepped back from its lander contract, but still remains eligible to bid on future contract opportunities. NASA has also opened a new phase of the CLPS project for companies.

In November 2018, NASA also announced the selection of nine companies to join the CLPS pool. Those companies, like the ones being announced today, would bid on lunar landing contracts.

"In July, NASA announced an opportunity for American companies to join the CLPS contract to deliver larger, heavier payloads to lunar surface" NASA officials said in statement. "The newly selected companies, along with the original nine selected in November 2018, all will be eligible to bid on future lunar delivery services, including task orders for heavier payloads, as well as payload integration and operations."

"The investigations and demonstrations launching on CLPS flights will help NASA study the moon as it prepares to send the first woman and next man to the lunar surface by 2024 through the agency’s Artemis program, with eventual human missions to Mars," agency officials added.

Correction: An earlier version of this story stated that the newly selected companies would build private moon landers for NASA. Their selection makes them eligible to compete for commercial moon lander contracts. Also, while Orbit Beyond stood down from its lander contract earlier this year, the company remains part of the CLPS program and is eligible to compete on future opportunities.