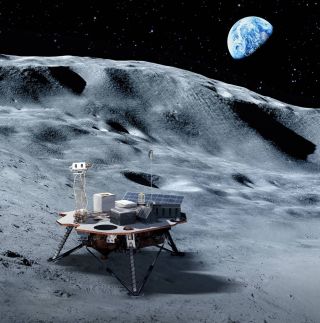 As NASA ramps up its efforts to land people on the moon by 2024, the agency has asked commercial companies to figure out how to bring heavier spacecraft to the lunar surface.

The latest call for opportunities within the Commercial Lunar Payload Services invites companies to discuss methods for landing hardware and equipment on the moon. NASA aims for this initiative to support future lunar exploration, including Artemis, its human spaceflight program Artemis. Responses are due on the Federal Business Opportunities website by Aug. 29.

"NASA anticipates the need for both small and mid-size lunar landers to enable a variety of science investigations, and larger technology demonstration payloads that will meet science objectives and human exploration goals," the agency said in a statement. "Future payloads could include rovers, power sources, science experiments, and technology to be infused into the Artemis program."

Related: 21 Most Marvelous Moon Missions of All Time

These new contracts have a combined maximum value of $2.6 billion with performance through 2028.Companies  looking to respond to NASA’s request must develop methods that account for variables  including indefinite delivery and indefinite quantity. In other words, their methods should theoretically be able to land an indefinite amount of hardware and equipment on the moon for the foreseeable future. The selected companies will join a group of nine other firms which have already been selected to provide services for the lunar surface with technologies that may additionally be used for eventual missions to the Red Planet.

As a result, NASA made a decision to comply with Orbit Beyond Inc’s request and terminated the task order on terms agreeable to both parties. Orbit Beyond, Inc. remains a CLPS contract awardee and may be eligible to compete for future opportunities: https://t.co/Hxvj5BJCaV (3/3) pic.twitter.com/ntRoUQ7VyAJuly 29, 2019

One of the companies previously tapped for lunar journeys, Orbit Beyond, dropped out of its deal to land one of the first three spacecraft on the moon in 2020, NASA announced this week. Orbit Beyond stated that it could not complete the work on time, and NASA decided to terminate the task order "on terms agreeable to both parties," Thomas Zurbuchen, the head of NASA's science mission directorate, said via Twitter on Monday. "Orbit Beyond, Inc. remains a CLPS contract awardee and may be eligible to compete for future opportunities," he added.