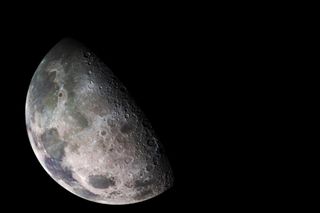 NASA is eager to get back to the surface of the moon.

In November, the agency tagged nine American companies as eligible to bid on delivering robotic NASA payloads to the moon, via Commercial Lunar Payload Services (CLPS) contracts. Thursday (Feb. 14), NASA officials announced that the first "task order" for such a delivery will likely come out in a month or so — and that flight is expected to follow in relatively short order.

"For us, if we had any wish, I would like to fly this calendar year," Thomas Zurbuchen, associate administrator for NASA’s Science Mission Directorate, said during a webcast "media roundtable" at agency headquarters in Washington. [21 Most Marvelous Moon Missions of All Time]

"We care about speed. We want to start taking shots on goal," Zurbuchen said, noting that NASA will provide the eligible companies with financial incentives to get off the ground faster.

NASA is willing to take some risks in these early days to help spur the development of the CLPS program and the commercial lunar-delivery business as a whole, he said, adding: "We do not expect that every one of those launches, or every one of those landings, will be successful."

These outfits will compete to tote a variety of payloads over the coming months and years, NASA officials have said. For example, some launches will carry scientific instruments intended to help solve moon mysteries, whereas others will deliver resource-prospecting gear and other technology demonstrations designed to pave the way for human settlement.

The main lunar resource to be exploited, at least initially, is water. The lunar surface has lots of this stuff, locked up as ice on the permanently shadowed floors of polar craters. This water will aid lunar settlement and further exploration, and not just by slaking astronauts' thirst, NASA officials say. Water can also be split into its constituent hydrogen and oxygen, the chief components of rocket fuel.

The CLPS program is just part of NASA's broad moon-exploration plan, which prioritizes an open architecture that encourages cooperation with many commercial and international partners. (Indeed, NASA wants to be the commercial landers' first, but not only, customer.)

One of the most critical pieces of this plan is a small space station, called the Gateway, which NASA aims to start building in lunar orbit in 2022. Gateway will be a hub for many kinds of lunar exploration, including sorties to the surface by landers both crewed and uncrewed.

If everything goes according to plan, NASA astronauts will take their first such sortie in 2028 — 56 years after Apollo 17 crewmembers left the last boot prints on the lunar surface.

"This time when we go to the moon, we're actually going to stay," Bridenstine said.

It's also important, he added, to "build as many capabilities into the system as possible that can replicated for an eventual [crewed] mission to Mars."