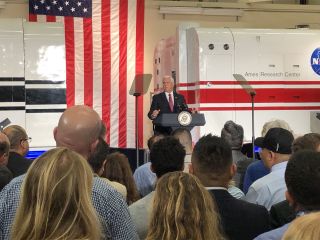 MOUNTAIN VIEW, Calif. — Fifty years to the day after the United States launched the second-ever crewed mission to the surface of the moon, Vice President Mike Pence stressed the importance of going back to Earth's nearest neighbor.

During a speech here at NASA's Ames Research Center Thursday (Nov. 14) — the 50th anniversary of the liftoff of the Apollo 12 mission — Pence lauded the many thousands of men and women who helped make the United States' epic moon landings possible so many years ago. And he thanked the Ames workforce, and the rest of NASA, for their labors on the next giant leap as well.

"We will ensure that the next man, and the first woman, on the moon will be American astronauts," Pence told a cheering crowd of Ames employees. "Artemis is here!"

Related: Home On the Moon: How to Build a Lunar Colony

Artemis to the moon

Artemis is NASA's program of crewed lunar exploration, which is working to pull off the next human lunar landing by 2024 and to establish a sustainable, long-term presence on and around the moon by 2028.

But Artemis' envisioned reach goes even farther out into the final frontier. The program's ultimate goal is to develop the skills and techniques necessary to put boots on Mars, which NASA wants to do sometime in the 2030s.

Achieving these goals is a priority for the Trump Administration, said Pence, who also chairs the U.S. National Space Council.

"When it comes to space, you know, President Trump probably put it best. He said, 'It is America's destiny to be the leader amongst nations in our adventure into the great unknown,'" the vice president said. "And we believe it."

NASA officials frequently stress that Artemis is very different than Apollo — namely, that the current program is going back to the moon to stay (whereas Apollo's chief aim was to notch a huge win in the Cold War space race with the Soviet Union). But Artemis is following in its predecessor's footsteps in some very important ways, NASA chief Jim Bridenstine said during Thursday's event at Ames.

For example, Apollo was developed during a time of turmoil in the United States, Bridenstine said, citing the Vietnam War, civil rights abuses and protests, and widespread riots on college campuses throughout the 1960s.

"But when it came to space exploration, we as a nation came together, bipartisan," he said. "And I’ll tell you, that’s what we’re doing now. We are going sustainably to the moon. We’re going with commercial partners; we’re going with international partners. And in the House of Representatives and in the Senate, we have bipartisan support to achieve this."

Artemis also has the potential to be Apollo-level epic, Bridenstine said — something that pervades the national culture and consciousness for decades to come. He mentioned the crowd of 500,000 people that descended on the National Mall in Washington, D.C. this July to mark the 50th anniversary of the Apollo 11 moon landing.

"They were celebrating something we did 50 years ago, and here’s what we in this room have to think about: What is it that we’re doing today that we’re going to be able to celebrate 50 years from now with the same enthusiasm that they had just a few short months ago?" Bridenstine said. "Well, that’s what we’re building with the Artemis program."

Pence did more at Ames today than just address a crowd; he also toured the center.

The vice president witnessed a test at the Arc Jet Complex, which helps engineers develop and prove out heat-shield technology; executed a virtual lunar landing (with Bridenstine's help) in the Vertical Motion Simulator (VMS), the world's largest flight simulator; and got the skinny on VIPER (Volatiles Investigating Polar Exploration Rover), an Ames-led mission that will land near the moon's south pole in December 2022 to assess the stores of water ice in the region.

The VMS experience made quite an impression on Pence.

"Thanks for letting me get in that simulator," he said during his speech today. "That was about the coolest thing I've done in a long time."

Bridenstine is a relatively frequent visitor to Ames, but Pence had never toured the site before. Indeed, he's just the third vice president ever to do so, after Lyndon Baines Johnson in 1961 and George H.W. Bush in 1988, Ames officials said.

No president has ever gotten an official Ames tour. (LBJ and George H.W. Bush later became presidents, of course, but they were veeps when they visited.) However, it's not uncommon for presidents and vice presidents to land and take off from Moffett Federal Airfield, which is on Ames' grounds.