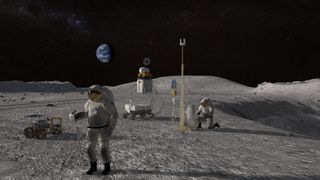 NASA's Artemis program aims to land the first woman and next man on the moon by 2024.
(Image: © NASA)

WASHINGTON -- The United States is leading the world in space exploration once more but is still willing to work with "like-minded" countries to expand humanity's reach throughout the cosmos, Vice President Mike Pence told an international crowd today (Oct. 21).

Speaking at the 70th International Astronautical Congress here, Pence said NASA's push to send American astronauts back to the moon by 2024 shows a "renewed vigor and vision" for U.S. space exploration under the Trump administration.

"The truth is, for more than a generation, a vision for human space exploration had languished, in this country and around the world," Pence said. "But those days are over."

"With America's renewed vision for human space exploration, we will lead mankind into the vast expanse of space," he added.

Earlier this year, Pence and the Trump administration tasked NASA with landing the first woman and the next man on the moon by 2024 using "any means necessary." That project, which NASA has named Artemis (after the twin sister of Apollo in Greek mythology) comes as NASA celebrates the 50th anniversary of its historic Apollo 11 moon landing in 1969, which sent astronauts Neil Armstrong and Buzz Aldrin to the lunar surface while crewmate Michael Collins remained in orbit.

The Apollo 11 crew was honored by the International Astronautical Federation's World Space Award, and Pence hailed Aldrin, Collins' grandson and Armstrong's son Mark during his remarks.

"With Apollo in the history books, the Artemis mission has begun, and we are well on our way to making NASA's moon-to-Mars mission a reality," Pence said.

NASA has partnered with commercial companies to build elements of a planned space station near the moon, called the Gateway, to serve as a staging ground for future crewed missions. Meanwhile, the agency has tapped U.S. companies like SpaceX and Boeing to fly astronauts in space, and is working with Canada, Japan and Australia on its moon program.

Pence said that, while the U.S. aims to lead humanity's push into space, the country doesn't want to go alone.

Pence also touched on national security and space, specifically the new Space Force, a sixth branch of the U.S. military that the Trump administration wants to oversee space military efforts. The work the Space Force does won't just be for the United States, Pence said.