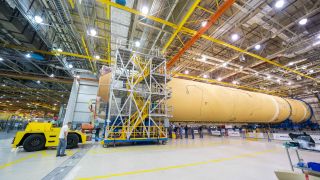 NASA has extended Boeing's moon rocket assembly authorization in preparation to support as many as 10 moon missions for the agency's Artemis program, which aims to land astronauts on the moon in 2024.

On Wednesday (Oct. 16), NASA announced interim additional funding for Boeing — and an authorization to buy raw materials for rocket-building in bulk — as the company and NASA continue to negotiate a full contract for Artemis. The larger contract, which the agency plans to finalize next year, is expected to support up to 10 core stages of the Space Launch System (SLS) rocket, as well as eight Exploration Upper Stages (EUS).

NASA currently has "no idea" how much funding it will give Boeing in the full contract, but that amount will be disclosed when the administration submits its next budget request in February, an agency spokesperson told Space.com. This additional rocket manufacturing is part of the agency's push to land humans on the lunar surface in five years, in fulfillment of a directive from the administration of U.S. President Donald Trump.

"It is urgent that we meet the President's goal to land astronauts on the Moon by 2024, and SLS is the only rocket that can help us meet that challenge," NASA Administrator Jim Bridenstine said in a statement.

"These initial steps allow NASA to start building the core stage that will launch the next astronauts to set foot on the lunar surface, and build the powerful exploration upper stage that will expand the possibilities for Artemis missions by sending hardware and cargo — along with humans or even heavier cargo — needed to explore the moon or Mars."

Boeing already has a contract to build the SLS core stages for the Artemis 1 and Artemis 2 missions, and the first EUS for Artemis 4, among other components. Artemis 1 is expected to fly an uncrewed spacecraft around the moon and back no earlier than mid-2020, while Artemis 2 will be the first crewed mission (a lunar flyby without a landing), which NASA is currently aiming to launch in 2022.

The agency said the new money will be used for Boeing to start building the third SLS core stage, and to do bulk orders of materials that will be used to build rockets for subsequent missions to save money. The third core stage is expected to fly on Artemis 3, which is scheduled to bring astronauts to the lunar surface.

NASA said the new contract is expected to save money because the SLS will be made in a production line, rather than as one-off builds. Boeing can use the "lessons learned" from creating earlier rockets to save money and time, potentially, on the later builds, NASA officials said in the statement.

The needs of NASA will change as Boeing's expected production of SLS rockets continues beyond the first three Artemis missions. While the earliest stages of the program will use an interim cryogenic propulsion stage to bring the Orion spacecraft to the moon, Artemis 4 and later missions will use the more powerful EUS. The EUS will be used to send larger cargo along with an astronaut crew — or dedicated cargo-only missions — to the moon, Mars and possibly other destinations in the solar system.

NASA added that work is "well underway" for both the Artemis 1 and 2 rockets, since the core stage assembly for both is almost finished at NASA's Michoud Assembly Facility in New Orleans. The next major scheduled tasks for Artemis 1's preparation include test-firing the core stage's four RS-25 engines at NASA's Stennis Space Center in Mississippi, and then building the entire rocket at NASA's Kennedy Space Center in Florida ahead of the launch.