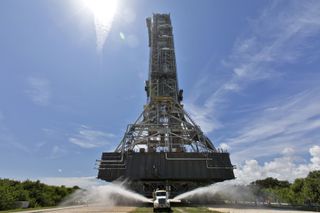 In a turn from the agency's original plan, NASA has awarded a contract for a second mobile launcher to be built at Kennedy Space Center.

In 2018, the space agency announced that a second mobile launcher wouldn't be built because there were no funds for its construction in the 2019 budget. Instead, NASA planned to modify the existing mobile launcher.

Now, NASA has announced that Bechtel National, Inc., of Reston, Virginia, will design and build a second mobile launcher, known as Mobile Launcher 2, or ML2. Having a second launcher will cut the amount of time between two versions of NASA's Space Launch System (SLS), the most powerful rocket the agency has ever built. Bechtel National is expected to complete the design, build, testing and commissioning of the mobile launcher within 44 months, beginning on July 1, according to NASA.

Without this second mobile launcher, the space agency would have had to launch SLS Block 1 rocket, then modify the platform to accommodate the taller SLS Block 1B before the second variety could launch.

In a 2017 advisory report, the Aerospace Safety Advisory Panel recommended building a second mobile launch platform, stating that having a second platform would save an estimated 33 months between launches and prevent safety problems arising from a "deterioration in both the number and skill of the ground launch work force."

ML2 will be used to assemble, process and launch both SLS Block 1B and the Orion spacecraft for missions under NASA's Moon to Mars exploration approach. Before attempting to send a human crew to Mars, President Donald Trump asked NASA to first send humans back to the moon.

"This time, when we go to the Moon, we will stay," NASA Administrator Jim Bridenstine said in a statement. "And then we will use what we learn on the Moon to take the next giant leap — sending astronauts to Mars."

NASA plans to have people on the moon by 2024, and both the SLS and Orion launches will help them get there.