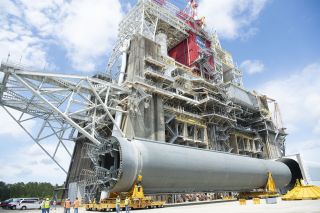 Bridenstine told Congress in March that NASA might skip the green run, a months-long series of tests that culminates with the firing of the SLS core stage's four RS-25 engines for 8 minutes — the duration they'll burn during a launch to the moon.

This fast-track approach could shave 6 months off the SLS' development schedule, potentially keeping the rocket on target for its debut launch in mid-2020, Bridenstine explained at the time. That uncrewed first flight, known as Artemis 1, will send NASA's Orion capsule on a trip around the moon, helping pave the way for a planned crewed landing near the lunar south pole by 2024.

But today, Bridenstine announced that the SLS green run is definitely on.

"@NASA will do a Green Run test for @NASA_SLS prior to #Artemis 1. Here’s why: Astronaut safety is our #1 priority; Increases probability of a successful Moon landing in 2024; It’s important to discover issues earlier rather than later," he said via Twitter.

The green run will take place at NASA's Stennis Space Center in Mississippi. Engineers will test the 212-foot-tall (65 meters) core stage's many components during a series of checkouts and trials before finally putting everything together for the 8-minute engine firing. (The term "green run," by the way, refers to the testing and integrated operation of new hardware.)

.@NASA will do a Green Run test for @NASA_SLS prior to #Artemis 1. Here’s why:• Astronaut safety is our #1 priority• Increases probability of a successful Moon landing in 2024• It’s important to discover issues earlier rather than laterMore: https://t.co/yTfRC4D7mq pic.twitter.com/TnTtCSGYI9July 25, 2019

"With Green Run, we verify each individual component operates well within the core stage system," SLS deputy stages manager Lisa Bates said in a statement. "It’s more than testing. It’s the first time the stage will come to life and be fully operational from the avionics in the top of the core stage to the engines at the bottom."

The SLS green run will be a first for NASA, which has historically performed such initial trials with test versions of the relevant rockets, not the actual flight hardware itself.

"Green Run is a historic moment for NASA and Stennis for a number of reasons," Stennis director Richard Gilbrech said in the same statement. "For the first time in NASA’s history, a launch vehicle will use flight hardware for its first test, and the Stennis test stands will once again test the core stage for moon missions."

If the green run goes well, engineers will check out the core stage, refurbish it as necessary and then ship it to NASA's Kennedy Space Center in Florida to await launch, NASA officials said.

Artemis is the name of NASA's ambitious lunar-exploration program, which aims to help establish a long-term, sustainable human presence on and around the moon over the course of the next decade or so. The ultimate goal is to learn the skills and strategies necessary to get astronauts safely to Mars, NASA officials have said.

The first Orion-SLS flight to carry astronauts, Artemis 2, is scheduled to lift off no earlier than 2022.