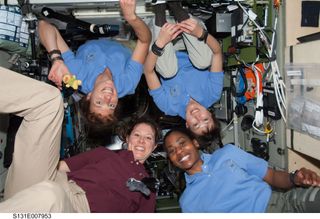 Of the 12 people who have walked on the moon, zero have been women. NASA's Artemis program aims to change that by landing the first woman on the moon.

"I have a daughter. She is 11 years old, and I want her to see herself in the same position that our current, very diverse astronaut corps currently sees itself, having the opportunity to go to the moon," NASA Administrator Jim Bridenstine said in an agency town hall May 14. "In the 1960s, young ladies didn't have the opportunity to see themselves in that role. Today they do, and I think this is a very exciting opportunity."

NASA hopes that landing a woman on the moon may inspire new generations to dream big and work hard by providing representation for young girls. To date, only 64 of the 566 people who have flown to space have been women.

With the ambitious goal to launch this lunar mission by 2024, people have started to speculate about who might be the first woman to walk on the moon. Of the 38 active astronauts in NASA's astronaut corps, 12 are women, and another five are in the class that will wrap up astronaut training this year, for a total of 17 potential moonwalkers.

Bridenstine has said that the first woman to walk on the moon will be someone already in the astronaut corps and someone who has already worked aboard the International Space Station. Of the 12 women currently on active spaceflight duty, not all of them have flown to the space station yet.

Christina Koch is the only American woman currently in space. Selected for the astronaut corps in 2013, Koch flew to the space station for the first time in March and is scheduled to stay there until February 2020. If that plan holds, Koch will surpass astronaut Peggy Whitson's record for the longest single spaceflight made by a woman, of 288 days.

Koch arrived halfway through her training classmate Anne McClain's stay. McClain conducted two space walks during her six months in space. McClain happens to be the youngest member of the astronaut corps and completed over 2,000 flight hours in 20 different aircraft with the Army before becoming an astronaut.

Koch will be joined in September by Jessica Meir, a third member of the 2013 training class. She is a private pilot and a marine biologist who has also served as an aquanaut, living underwater as part of NASA's Extreme Environment Mission Operations program.

Related: Women in Space: A Universe of Firsts in Photos

Two Artemis candidates are currently working with Boeing through NASA's commercial crew program. Nicole Mann, an engineer who was selected for the astronaut corps in 2013, is currently training for the first crewed flight of Boeing's Starliner spacecraft, which will be a demonstration mission. Sunita Williams, who is training for the first full space station mission to fly on Starliner, is a two-time spaceflyer who has spent over six months in orbit and completed four spacewalks.

Serena Auñón-Chancellor began working at NASA in 2006 as a flight surgeon and, after being selected for NASA's astronaut corps in 2009, she has flown to the space station once, spending a total of 197 days in space.

Kate Rubins was selected for the astronaut corps in 2009 and has flown to the space station once, completing two spacewalks and spending 115 days in space. Rubins is a microbiologist who was the first person to sequence DNA in space.

And one female astronaut currently active in the corps has yet to fly to space. Jeanette Epps, who earned a U.S. patent with the Ford Motor Company and has worked for the CIA, currently supports space station crews.