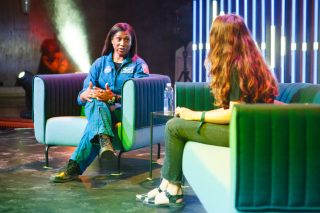 NASA astronaut Jeanette Epps speaks with science writer Megan Gannon about space exploration and her unexpected removal from a spaceflight this year during the Tech Open Air festival in Berlin.

BERLIN — NASA astronaut Jeanette Epps has spoken for the first time about her unexpected removal from an assignment to go to space this year.

In an interview here at the annual Tech Open Air festival Thursday (June 21), Epps said she couldn't speculate about why she was pulled from the mission just months before the launch date.

"I don't know where the decision came from and how it was made, in detail or at what level," Epps said. [Expedition 56: The Space Station Mission in Photos]

You can watch the interview in the window above, with Epps' comments on her space mission occurring at the 37-minute mark.

Epps, an aerospace engineer and former CIA analyst, joined the astronaut corps in 2009. She had been assigned to be a flight engineer aboard the International Space Station (ISS) for Expeditions 56 and 57. The mission would have been her first, and Epps would have made history as the first African-American crewmember to live on the ISS.

However, in January, NASA revealed that Epps had been replaced by fellow astronaut Serena Auñón-Chancellor. On June 6, Auñón-Chancellor launched inside a Russian Soyuz capsule from Baikonur Cosmodrome in Kazakhstan alongside cosmonaut Sergey Prokopyev and European Space Agency astronaut Alexander Gerst, of Germany.

Epps said other astronauts in the past had been bumped from flight assignments because of health or family issues, but those were not factors in her case. She said she had passed all of her exams and the training needed to go to space.

"With all of the training I had done and completed in Houston, Russia, Germany, Japan—everything was completed," Epps said. She expressed worry that all of the work to prepare her for a Russian launch could go to waste if she is not reassigned for another mission soon.

"I think what is happening soon is that we're going to run out of Soyuz seats, because we are building commercial crew vehicles through Elon Musk's SpaceX and through Boeing," Epps said. "We'll have fewer and fewer seats on the Soyuz, so I'm not sure if, in the future, if I am assigned a mission, it will be on a Soyuz, even though all the training for Russia has been completed."

Epps said she did not believe the decision was made by her Russian colleagues.

"I've been through the training with them, and I think I was able to develop really good working relationships with everyone there," Epps said.

"I think some of the [Russian partners] may have known that NASA was thinking of doing this, but they were adamant that I had to complete all of the training, even down to, out in Baikonur, doing the leak check for the suit that was made for me and the seat liner that was made for me," Epps said. "They wanted to check everything and check it inside the Soyuz, so they know, if and when I fly, that my suit fit was good and the seat liner that they made for me was a good fit, so that I would be comfortable in the right seat of the Soyuz."

Epps added that several of her Russian colleagues even voiced concern about her removal from the flight "in the sense that it is not safe to remove someone from a crew that has trained together for two years, or for a year at least, and went through all of the final exams."

Epps also addressed speculation that racism or sexism might have motivated her abrupt removal from the mission.

"There's no time to really be concerned about sexism and racism and things like that, because we have to perform," Epps said. "And if it comes into play, then you're hindering the mission, and you're hindering the performance. And so whether or not it is a factor, I can't speculate what people are thinking and doing unless I have a little bit more information."

While she is waiting for more information, Epps said she has resumed her duties with the astronaut corps in Houston, including working on NASA's Orion program and serving as CAPCOM, the liaison between the astronauts in space and the flight controllers in Mission Control. She said it was a "pleasant surprise" to have former astronauts, her trainers and others at NASA supporting her when she returned from Russia.

"There were a lot of people who were really supportive — former astronauts and people like that — who reached out and were really helpful just talking to me, trying to figure out a way forward and what happened," Epps said. "I was very happy that I found out that I had more friends than I thought."