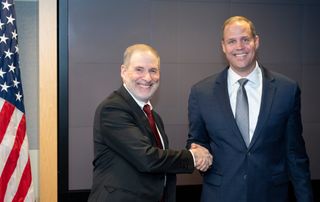 Douglas Loverro (left) shakes hands with NASA Administrator Jim Bridenstine after being sworn in to his new position as the associate administrator of NASA’s Human Exploration and Operations Mission Directorate, on Dec. 2, 2019.
(Image: © NASA)

NASA just appointed a new leader for its human spaceflight program, and he's dead set on making sure the agency puts astronauts on the moon in 2024.

Douglas Loverro was sworn in as the new associate administrator for NASA's Human Exploration and Operations Mission Directorate on Monday (Dec. 2), and on Tuesday he hosted an agency-wide town hall at NASA Headquarters in Washington to introduce himself to the workforce.

During the town hall, Loverro answered some tough questions from NASA workers about the feasibility of a 2024 moon landing, the possibility that funding issues could delay or even cancel the Artemis program, and the future of NASA's long-delayed and over budget Space Launch System (SLS) rocket. Smiling confidently as he answered difficult questions, Loverro reassured the audience that everything will be alright — and that NASA can successfully land astronauts on the moon by 2024, even if the agency faces setbacks in funding.

"We can't use the funding as a crutch," Loverro said in response to a question about the current stall in funding for NASA's fiscal year 2020 budget. The new budget is currently in limbo after the House didn't include money for a lunar lander in its version of the spending bill, and the Senate's spending bill was criticized by the White House for not giving NASA enough money to build a lander.

Loverro added that NASA has "the imagination to figure out how we treat funding just like we treat any other issue that comes up in the program. We're going to have technical issues, engineering issues, science issues — we're going to have issues across the board, and funding is one of those issues. We can't let that be the single determinant of success."

While the uncertainty of future funding levels and changing national priorities will always be a concern for NASA, the agency has also faced years of criticism for how it has spent money in the past. The SLS rocket, which NASA designed specifically to launch missions to the moon with the Orion crew capsule, was originally supposed to launch on its first test flight in 2017. But that mission is now expected to slip to 2021, and it has already gone more than $4 billion over its original $10 billion budget.

And while the development of SLS has cost more than the agency originally planned, the cost of launching an SLS rocket is also far greater than the cost of launching on a commercial heavy-lift rocket. At around $2 billion per launch, an SLS mission would cost roughly $1.5 billion more than a launch using SpaceX's Starship or Blue Origin's New Glenn rocket — both of which are reusable, unlike SLS.

NASA has already considered using a commercial rocket instead of SLS to help the agency meet its 2024 moon landing goal, which has raised concerns that SLS won't be able to compete with its less-costly alternatives.

NASA Administrator Jim Bridenstine, who was also present at the town hall, said he disagreed with the projected $2 billion cost per launch, suggesting that the cost could actually be much lower. And even if SLS can't match the price of its commercial alternatives, Loverro rejected the idea that there is any kind of "competition" between the different rockets.

"I don't view that as all the dynamic," Loverro said. "I think this is a this is a large ecosystem of space capabilities, and we need every capability that the nation is going to provide, whether the nation provides it through government funding, as SLS is, or through entrepreneurial and commercial funding such as for New Glenn and for Starship."

He added that NASA will "make decisions along the way as to what makes most sense as developments of all of those systems come forward, but we've got to go ahead and right now focus on the one that we have designed specifically for the mission, and then we will evaluate as we move forward how many [SLS rockets] we need," and how commercial rockets can be best integrated into the program.

NASA's workforce may have some doubts about whether the agency will be able to put astronauts on the moon in 2024, but Loverro seemed confident that NASA can make it happen. At the town hall, Loverro showed off a custom lapel pin, which he made himself, with a countdown clock that displays the number of days until Dec. 31, 2024, or the deadline to get astronauts to the moon.

Pointing to what he calls his "d-minus pin," which indicated that there were 1,855 days left until the end of 2024, Loverro said, "That's how much time that we have to go ahead and achieve the nation's goals."

"Some people have commented to me that this can create launch fever," he added. "Well, if this launch fever, I'm feeling pretty healthy right now!" Loverro explained that the intent of his pin "is not to go ahead and tell people to rush," but rather to remind people to "make every day count.