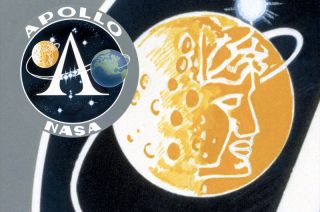 NASA's Artemis art was inspired by a detail in the Apollo program logo (inset) depicting the Greek god Apollo on the moon.
(Image: © NASA via collectSPACE.com)

NASA needs more money to meet its goal of landing humans on the moon in 2024, the White House recently warned Congress in a letter.

The tough talk about NASA funding came in a letter that Russell Vought, acting director of the Office of Management and Budget, sent to Sen. Richard Shelby (R-Ala.), chairman of the Senate Appropriations Committee, on Oct. 23. Vought raised concerns with several appropriations bills that Shelby's committee approved recently.

Among the issues mentioned was the bill passed by the Commerce, Justice, Science, and Related Agencies for NASA funding. While NASA appreciates "the committee's continued support for space exploration," wrote Vought in the Oct. 23 letter, which was first reported by Ars Technica, he said that the allocated money doesn't go far enough.

NASA's $22.8 billion budget for fiscal year 2019 includes $1.6 billion provided for exploration research and development (R&D), Vought wrote. But this money is "insufficient to fully fund the lander system that astronauts would use to return to the moon in 2024," he wrote. Vought requested an additional $2.3 billion in the fiscal 2020 budget to keep NASA on track for its moon-landing goal.

It's been a busy year for NASA, which received a new mandate from the Trump administration in March to accelerate its moon-landing plans to 2024, up from the previous deadline of 2028. In comments made at the International Astronautical Congress in October, NASA administrator Jim Bridenstine said the shorter deadline would minimize funding and programmatic risk. But as SpaceNews reported on Friday (Nov. 7), even the NASA funding requests from the Trump administration have changed throughout the year.

Early in 2019, the White House requested $1.58 billion for exploration R&D — which is below the $1.64 billion that NASA actually received. In late March, Vice President Mike Pence announced the revised 2024 deadline; the Trump administration then asked for more appropriations money in May — after the CJS bill was already adopted, SpaceNews reported.

The budget amendment requested more funding for lunar landers and exploration technology, and less for NASA's planned Gateway space station, which is expected to begin orbiting the moon in the early 2020s.

"In May the White House requested an additional $1.6 billion in funding for NASA to achieve the goal of returning humans to the moon by 2024," SpaceNews reported. "That included $1 billion for lunar landers and $132 million for exploration technology, but a cut in Gateway funding of $321 million. Those changes increase the total exploration R&D request to more than $2.3 billion."

The letter from Vought also referenced a concern about NASA's planned Europa Clipper mission to Europa, a moon of Jupiter. The Senate has asked that it be launched on the agency's Space Launch System — a rocket that's expected to bring astronauts to the moon and Mars.