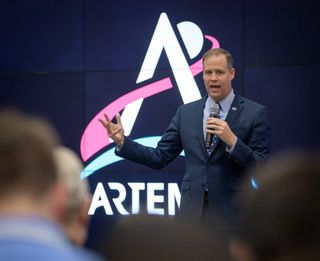 WASHINGTON — There are so many nations eager to join NASA's push to the moon that the coalition of 15 International Space Station countries may have even more company for the nascent Artemis lunar project, according to the agency.

In a press conference Thursday (Oct. 24), NASA Administrator Jim Bridenstine said that at least 26 nations had already met with him here at the International Astronautical Congress to discuss the Artemis lunar program and possibilities for contributing. How everybody may chip in still needs to be discussed. But NASA will likely work through agreements quickly, as the agency is tasked with landing humans on the moon in 2024.

The partnerships on the International Space Station have three levels of governance, according to the European Space Agency. Chief among them is an intergovernmental agreement between 15 nations. That treaty was signed in January 1998, long before the rise of private companies in space — and long before some countries became actively involved in space activities. How to accommodate all these new players is a big unknown, but NASA is talking it over with the interested parties, Bridenstine said.

The NASA administrator noted that the agency already has 700 agreements with various countries for space-exploration activities. But he did not specify how those could be used for Artemis, presumably because the program is still so new.

"The goal is to have many different nations living and working on the moon at the same time with a coalition," Bridenstine said at the press conference, where journalists and interested onlookers alike crowded in the middle of the exhibit floor. "When we look at what the contributions of our international partners are to this operation, you can imagine there are a lot of countries that will step up to the plate."

Private companies are already included in the Artemis strategy, Bridenstine added, through NASA's Commercial Lunar Services Payload program (CLPS). The agency has identified nine companies eligible for potential future contracts; two are tasked with delivering payloads to the moon in 2021. NASA added more opportunities for CLPS in August, too. "We are on-ramping small businesses all the time," Bridenstine said.

Another forthcoming change to international partnerships will happen shortly at the space station, when commercial crew vehicles should fly late this year or early next with astronauts on board. NASA has been buying Soyuz seats for its astronauts since the space shuttle program retired in 2011. Bridenstine told reporters that the agency hasn't yet entered negotiations for more Soyuz seats for astronauts but that he expects one or two seats would be required before commercial crew missions start in earnest.

Extra seats are accruing due to long-standing delays in the commercial crew program caused by technical and programmatic challenges. In September 2014, NASA awarded $2.6 billion to SpaceX and $4.2 billion to Boeing to make their spacecraft (called Crew Dragon and CST-100 Starliner, respectively) ready for astronauts. At the time, NASA wanted the vehicles to be ready to fly by 2017.

NASA hasn't published any timelines lately, citing a change of leadership in the human-exploration division. Bridenstine appointed a new associate administrator, Douglas Loverro, on Oct. 16. (Bill Gerstenmaier, who held the position for a decade, was reassigned this summer.)

Earlier this month, SpaceX CEO Elon Musk told CNN that Crew Dragon could fly astronauts in three to four months. Bridenstine disagreed with that timeline and said he expected that NASA will need to buy more Soyuz seats in 2020, for $85 million apiece, CNN reported.