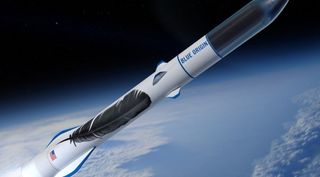 Blue Origin has so far signed up only commercial customers for its New Glenn rocket, but the company's new CEO said initial talks are underway about certifying it for U.S. government missions.
(Image: © Blue Origin)

New Glenn is an orbital launch vehicle that is expected to make its first flight around 2020. Its developer is Blue Origin, which is also making the New Shepard launcher and a crew capsule.

New Glenn continues the Blue Origin tradition of naming its boosters after American Mercury astronauts. In this case, Glenn is named after John Glenn, who made the first American orbital flight in 1962 and who returned to orbit in 1998, at age 78, for a space shuttle mission. Glenn was not only the first American to orbit in space, but also the oldest person to fly in space.

Stages: 2 or 3, including a reusable first stage

Blue Origin is traditionally reticent about sharing its plans far ahead of time, but there is some information available about the company and about New Glenn as the rocket continues development.

Blue Origin is currently developing and testing its New Shepard rocket, which also has a reusable first stage but is designed for suborbital flights. In November 2015, it became the first reusable rocket to make a soft ground landing. The company received a contract valued at $3.7 million in 2010 during an early stage of NASA's Commercial Crew Program, and is also working on a crew capsule that would ride aboard New Shepard.

For New Glenn, the rocket's planned launch profile looks like this: It will lift from a launch pad (which in a video released in 2017, looked like Launch Complex 36 at the Cape Canaveral Air Force Station in Florida, where Blue Origin is constructing a complex). Once it is above Earth, the rocket will separate its payload carrier from the first stage. This payload carrier will send a satellite into orbit, while the first stage lands safely on a ship's landing pad.

Blue Origin has already signed a few customers for the rocket. For example, it will put a geostationary satellite into orbit for Eutelsat Communications in 2021 or 2022. It also has contracts with smaller companies OneWeb and the Thailand-based mu Space corporation.

The company has also said it will try to certify New Glenn for national security-related government missions, which right now are largely performed by United Launch Alliance through its Atlas and Delta IV rocket lines. In the distant future, Blue Origin is also working on a possible moon flight program, called Blue Moon.

Interestingly enough, New Glenn isn't the only heavy-lift rocket from a private space company. SpaceX's Falcon Heavy made its debut flight in February 2018, setting up a probable rivalry with Blue Origin that will likely persist as the two new rocket types compete for rockets and customers.